Western Jets fly away with a win 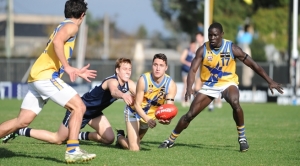 The Western Jets have flown away with an impressive win over superior ranked opponents the Geelong Falcons on Sunday at Avalon Airport Oval.

The Falcons came out of the blocks strongly in the first term, leading the Jets by 13 points at quarter time. Western Jets coach, Steve Kretiuk gave the team a rev up at the break which resulted in a significant shift in momentum.

“I don’t think we moved the footy with much conviction and overused the ball by hand when we had opportunities to get the ball into our forward line. We looked very dangerous when we came forward with Brown and White gaining the ascendancies on their opponents. So we asked them to move footy quicker into our forward 50 by not kicking to 50/50 contests coming out of defence and identifying the one on none that is able to reel and go.

“We also demanded a more disciplined approach when we were required to defend by covering their outlet players and making our tackles stick.”

The Jets took notice of Kretiuk’s message, with Brown and White kicking a pair each in the term and Bench and Aneet adding one major each. By the main break, the Jets had turned a 13 point deficit into a 25 point lead.

The third quarter produced another about-turn with the Geelong Falcons kicking the first three goals of the term.

Western struggled to push the ball out of Geelong’s forward 50, making silly errors in front of the Falcons goals which cost them on the score board.

The Jets were able to hold on and maintain a lead through the three quarter time break.

However, part way into the final term, the Falcons made a run at the Jets to get within one goal of their opponents.

Western showed the maturity and mental strength that they possess by stepping up to Geelong’s challenge and blowing them out on the park in the final minutes, finishing victors with a 23 point lead.

Kretiuk felt that his side put together a solid team effort, with a handful of notable performances.

“We asked all players to play the game effort after effort and contest after contest and we thought most players did this for most of the day. Some standouts were our skipper Brown who was outstanding as a forward target kicking five straight and went back to help steady the ship in the second half. Good contributors were first gamer Greenough, Hunter, Bench, Elkasovic and Nastasi. White showed some glimpses of brilliance as well kicking 4 goals.”

Thomas Gribble was a clear leader on the ground for the Falcons, amassing 28 disposals and five tackles during the match.

Brody Mahoney provided Geelong with a strong target up forward, booting 4 goals for the game – the second time he has achieved that this season.

Geelong and Western tallied very similar statistics in their contest. Steve Kretiuk gave an insight into what gave them the winning difference.

“Definitely our effectiveness coming forward. We had 26 scoring shots from 38 inside 50’s which is a good result for us and also our defenders being able to restrict Geelong’s dangerous forward line with only Mahoney (4 goals) and Wood (2 goals) causing any concern for us.

“Also Greenoughs ability to get his hands on the taps coming up against a player 203cm was a credit to his super athleticism and his desire to compete.”

The Jets have taken confidence from winning such an unpredictable battle against the Geelong Falcons.

“(I) was really pleased with their efforts to stay in the game even when Geelong rallied in the last quarter to get within a goal. What we take out of the game is that every player that takes the field for us is required to play his role for the team and when that happens we are always going to be a very competitive side,” Mr Kretiuk said.