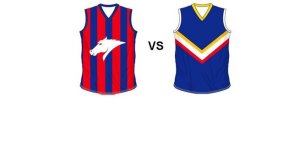 Round 11 of the TAC Cup competition kicks off at Warrawee Park when the Oakleigh Chargers go head to head with the Eastern Ranges on Saturday.

“Our team were very competitive for three quarters against the Jets but our players realize we need to be more consistent across four quarters.

“We need to get our contested numbers back above the line and increase our efforts to chase, tackle and put more pressure on the opposition when they have the ball.”

The Chargers will be a very different looking unit this weekend for their clash against the Ranges.

“We expect to make up to 17 changes for this week’s game against Eastern with some of our private schoolers being available for selection.

“State football will also affect our team this weekend, as we have four players with Vic Metro, two representing NSW, and one for the Northern Territory unavailable for selection this weekend.”

These two clubs faced one another in the first round of the competition back in March. That contest saw a fresh Oakleigh Chargers run away with a 28 point victory.

“Our club was keen to get the season rolling strongly while we had a full list to pick from. We were really pleased with the way we moved the ball around, our aggression at the contest and our ability to use the ball effectively to our forwards and kick a winning score. To Eastern’s credit they fought back strongly in the last quarter to considerably reduce the margin.

The Eastern Ranges enter Round 11 on a roll after winning three consecutive matches against quality opposition. These performances are a far cry from the sides seven game losing streak they experienced earlier in the season.

Coach Darren Bewick knew that it was only a matter of time before his team demonstrated their underlying potential.

“We have a fair few bottom age players and new players in the program, who have taken time to adapt to the level of TAC Cup footy. They are now starting to understand what's required to be competitive at this standard, and have taken far greater responsibility for their own performance as individuals, resulting in better overall team performance.

“The player’s attitude has been fantastic and it has been great to see them get some results for the amount of work they are doing.”

The Eastern Ranges have found a gem in their forward line this season, with Thomas Boyd developing into a goal kicking machine. The 198cm forward has retained control of the goal kicking leader board since round four of the competition.

“Tom is a very talented player who still has a lot of upside. He's still only 16 years old. Obviously he's a big lad who has a significant presence in our forward line. Takes a strong contested mark and is an accurate kick as his goal kicking shows. Still has a lot of work to do on many facets of his game, but we've been happy with his development and hope that continues.”

Boyd has kicked 10 goals over the sides’ last three matches and will be influential in their success this weekend.

Darren Bewick will continue his focus on the overall development of his players and hopes that it will result in more success and consequent gratification.

“Our aim is to continue to improve and develop our players individually and to continue to give them opportunities to play against the best young talent, which the TAC Cup competition gives them every week.

“As a team we just want to remain competitive, hopefully then we can win a few more games and the boys continue to enjoy and benefit as much as they can from being involved in the program,” Bewick said.