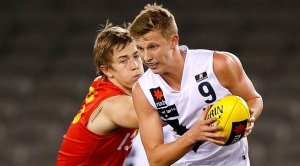 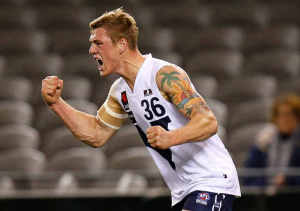 Vic Country emerged from its engrossing match against South Australia ahead in most key performance indicators that usually determine the result of a match.

Vic Country had seven more inside 50s, took five more marks inside 50, won the contested football possession count as well as the clearances.

It was Vic Country’s third agonising defeat, the third time where victory seemed so tantalisingly close, but vanished as a result of little lapses.

At various stages in all three games, Vic Country appeared on the cusp of victory, but was unable to secure it.

Membery kicked three first quarter goals plus provided the hand ball that set up Lachie Whitfield’s (pictured to) goal in the opening quarter.

Certainly, Vic Country didn’t plan to leave anything in the locker room as evidenced by Jake Calvert crashing a three-man South Australian pack, winning possession against the odds and pumping a 50-metre ball into the arms of Membery.

McDonough and Grundy both kicked two goals each as South Australia’s run and carry and ball efficiency troubled Vic Country.

While Vic Country regained the lead thanks to a goal from the hard working Lewis Taylor, one of Country’s best, Grundy and Tim O’Brien, another tall South Australian, proved a headache for defenders.

Grundy and O’Brien kicked all three of South Australia’s three third quarter goals as Country trailed by eight-points at three quarter time thanks to a late goal by Whitfield.

As valiantly as Country, led by Whitfield, Taylor, Oliver Wines and defender Nathan Wright, tried they were unable to make a dent in South Australia’s lead.

When William Hams goaled at the seven-minute mark of the last quarter, Country trailed by just eight points, but a 50 metre penalty and a goal later by the impressive Ben Kennedy kept Country at bay.

Country wasn’t able to capitalise on its inside 50 opportunities and despite a late goal by Membery – his fourth – it wasn’t enough.

Whitfield again highlighted his quality with a match equal high 26 possession – Kennedy and Jimmy Toumpas - Wines maintained his high Championship consistency with another 20 plus possession match and Wright was again outstanding in defence.

Taylor produced a stand out game, Membery was a constant live wire and Taylor Garner was also very good.