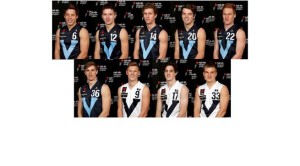 AFL Victoria’s Metro and Country teams boasted nine inclusions in the 2012 NAB AFL All-Australian team announced at the end of the U18 Championships that were completed on Wednesday in Melbourne.

It comes as no surprise that 2012 Championship winner Vic Metro had six players selected in the team, with Vic Country having three. North Ballarat Rebels Jake Neade - playing for NT - was also selected in the All Australian team.

At the end of the Championships a MVP was selected from each side, with six of the MVP’s gaining selection in the All Australian team.

The division one (Vic Metro) and two (NT) Championship coaches were selected as Coach (Brenton Toy) and assistant (Rohan Welsh) of the All Australian team, with NT coach receiving the main honour after NT inflicted Vic Metro’s only defeat of the Championship.

Lachie Whitfield from Vic Country (Dandenong Southern Stingrays) won the Larke Medal, presented to the Division One best and fairest.

Jake Neade from the Northern Territory won the Harrison Medal, presented to the Division Two best and fairest.