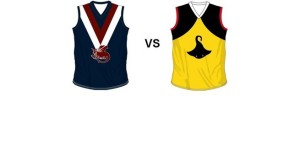 Round 13 of the TAC Cup competition will bring upon a battle between the Sandringham Dragons and the Dandenong Southern Stingrays at Shepley Oval.

Rewind ten rounds and you would see two very different looking sides going head to head, with Sandringham walking away with a 12 point victory as Dragons coach Justin Plapp explained.

“Last time we met Dandenong, they got off to a great start with their attack on the football. Obviously with a home ground advantage our start is going to be vital this time so that will defiantly be a focus area.

“Both teams will have a lot of players coming back from Metro, Country & private school commitments so it promises to be quite a high quality game of football.”

The Dragons approach the final rounds of the competition with high spirits, fielding close to their best possible team.

“We are nearly at full strength but we have a couple of players that will return in the next couple of weeks and they will defiantly be pushing to play in our best 22,” Plapp said.

Sandringham enters this weekend having executed a mammoth win against the Eastern Ranges in Round 12. Plapp felt his side played the ground to their best advantage.

“The biggest asset was our ability to use our leg speed and try to utilise the width and space of Box Hill City Oval. We also we had a massive focus on our team involvements with every player contributing somehow.”

The Dandenong Stingrays advance into Round 13 having experienced a four point loss to Gippsland Power over the weekend. The Stingrays went into the final term leading by 10 points but the gutsy Power booted three goals to one to win in the closing moments of the game.

Dandenong Coach Graeme Yeats took time after the game to identify the necessary improvements to his side.

“In post match we discussed the way we played in the final 10 minutes of the game. We identified that we made some key errors when in possession. Some of our decisions were poor and when this occurred, Gippy’s rebound was clinical and made us pay on the scoreboard.

“Also when they challenged us late, we became very reactive and were reluctant to take the game on.”

Yeats believes that his side requires further development in their ability to close games against the best sides in the competition.

“Our consistency of effort in games has fluctuated so we must be more diligent and show more resilience against really good opposition. There were positives in relation to players getting game time after being out for long periods. Jason Pongracic played his third game back after long layoff and Josh Newman was one of our best in second game back after missing 7 weeks with a broken jaw. There are always positives no matter what the result so we move on to our next challenge with the aim of improvement in all areas.”

The Stingrays have developed a depth to their squad that should provide them with dividends come finals.

“Like some teams in the competition, school footy commitments and Nationals participations reduce your capacity to get your absolute best on the park regularly. But in saying this we get the opportunity to see what depth we have on our list. We played our 52nd player on the weekend which is great for depth development and exposure which is what this comps about.

“We have made 26 changes to our team in the last 4 rounds and our performances have been very good in spite of this, so we get the opportunity to play most or all of our list.

“We get a chance now to put our best on the park which we have not done this year with the Nationals boys returning, so it will be interesting to see how we go.”

Dandenong will maintain an emphasis on their own performance, which they hope will lead to success.

“Our focus is always getting our players to play the brand we think works for us. Our structure is very important and our style of game on both sides of the ball is a work in progress all year.

“If we can turn the intensity up a little more and use the ball more efficiently we can attain our weekly objectives that we strive for.

“It is always a challenge to get the balance right with the players having to recognise what role they play in every game scenario when you break it down,” Yeats said.