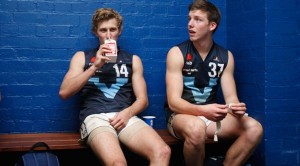 JOE DANIHER has grown up with footy. Aidan Corr spent the first three years of his life growing up in Ireland. Nick Vlastuin and Jonathan O'Rourke will be right on recruiters' minds at this year's NAB AFL Draft, while Jack Billings and Tom Boyd will need to wait until next year.

Luke McDonald, James Stewart and Lachie Hunter are father-son candidates, but Matthew Dick only recently gave up aspirations of a basketball career and tried his hand at football.

There are many stories that make up Vic Metro: the little-favoured side that overcame a shock loss and injuries to key personnel to win the division one title at this year's NAB AFL Under-18 Championships.

From the outside, the championships appear so easy - assemble the most promising teenage footballers in the country, put them on a field, wind them up and let them play.

But in spending the entire national carnival embedded with Vic Metro, AFL.com.au discovered the reality.

It showed there was so much more that needed to be balanced and thought out to get things right, like the role of coaching, the issues surrounding team selection, the place of recruiters, and the development of teenagers who aspire to the top level.

This is the story of Metro: its players, its culture, its challenges, and its championship.


THE STORY began, officially, in April, when a group of 56 players were part of the trial games and preliminary training sessions. But it started, in reality, after Metro's shock defeat to division two team Northern Territory in Darwin in the first round in late May. The loss provided a reference point and a spur for the rest of the championships.