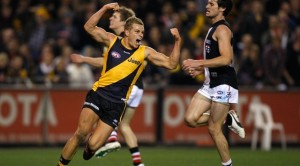 Brandon Ellis from the Richmond Football Club is the Round 17 NAB AFL Rising Star nominee.

The 18-year-old defender was selection 15 in the 2011 NAB AFL Draft. He was recruited from the Calder Cannons and played his junior football at West Coburg Junior Football Club.

Ellis has demonstrated his maturity and composure on the football field, being given the responsibility for kick-ins and defensive jobs on the opposition’s best small forward from his debut in Round 1.

Ellis’s dedication and positive attitude has resulted in selection for every round this year. His improvement has been evident in recent weeks, averaging more than 20 possessions.