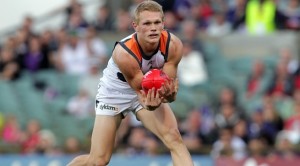 Adam Treloar from the Greater Western Sydney Giants is the Round 18 NAB AFL Rising Star nominee.

Adam played his TAC Cup football at the Dandenong Stingrays and was a 17-year-old prelisted selection for GWS.

In what was a disappointing match for GWS, Adam provided a shining light against the Magpies, accumulating 37 touches (18 kicks and 19 handpasses), nine marks and a goal against a tough opponent in Scott Pendlebury.

Giants coach Kevin Sheedy said Adam has been terrific for the team.

“This is a great achievement for Adam. He’s been here for two years now, as he came up as a pre listed 17 year old and he has shown some strong character.

“Last year he had to work through a lot of injury frustrations, which also caused him to miss the early stages of this season. But he's been able to come back and is now starting to really gain his confidence and play very well.

“For him to actually get the ball over 35 times on the weekend is a huge achievement for a player in his first year of AFL football and particularly playing against a side that was in the Grand Final last year and Premiership winners just the year before.

“It’s been great to see him not only getting the ball but challenging himself against the best teams,” he said.

The talented midfielder is the fifth former TAC Cup player to be nominated from the Giants for the NAB AFL Rising Star in 2012. The Giants’ nominations include Jeremy Cameron (Round Two), Tomas Bugg (Round Five), Dylan Shiel (Round 10) and Toby Greene (Round 14).