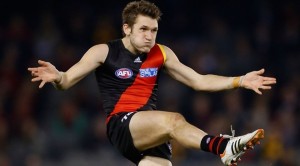 Former Western Jet, Elliott Kavanagh made his official AFL debut for the Essendon Football Club in Round 18 against the Hawks.

The classy midfielder was picked with selection 19 in the 2011 NAB AFL Draft, but due to consecutive hamstring issues the Bombers did not feel the need to rush his initiation into senior football.

Kavanagh was a late inclusion for Essendon on the weekend replacing Cale Hooker in the Dons line-up. The 19 year old amassed 8 kicks, 5 handballs and 4 marks during the 77 percent of game time his was involved in.

Kavanagh gained his selection after consistent form over a number of weeks for Bendigo Gold in the Peter Jackson VFL.