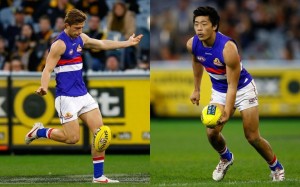 The last two weeks have brought about the AFL debut of four former TAC Cup players. Tim Golds, Fletcher Roberts and Lin Jong made their first official appearances for their respective clubs over the weekend and Michael Talia in the week prior.

Michael Talia, was recruited from the Calder Cannons and selected by the Western Bulldogs in the 2011 NAB AFL Draft with a second round selection, No. 39 overall.

Round 19 saw Talia debut for the Dogs against a dominant North Melbourne side, going down by 54 points. The former Cannon put his stamp on the game, kicking a goal and highlighting his determination by accumulating four extra efforts, putting him third in his team for the stat.

The former Vic Metro and All-Australian player has talent running through his veins. Talia is brother of Daniel (Adelaide) and grandson of Bulldogs premiership ruckman Harvey Stevens.

Round 20 provided Talia’s teammates, Lin Jong and Fletcher Roberts with an opportunity to debut for the Bulldogs.

Jong was recruited from the Oakleigh Chargers with selection nine in the 2011 Rookie Draft. He was elevated to the Club’s primary list last week, replacing Daniel Cross who has been placed on the long term injury list.

On the weekend, the 19 year old continued his fine form that had been on display in the Peter Jackson VFL, amassing 16 disposals, five contested possessions and four defensive clearances against Richmond.

Fletcher Roberts was a late inclusion in the game, coming onto the ground in the third quarter, replacing Tom Campbell.

Roberts, a former Sandringham Dragon was recruited by the Dogs after kicking an impressive five goals in the 2011 TAC Cup Grand Final.

The 193cm tall forward gathered eight possessions and three marks in his few minutes on the weekend.

Greater Western Sydney Giants added another debut to their list, with Tim Golds making his first official appearance in their game against the Gold Coast Suns on the weekend.

The former Oakleigh Charger is an athletic, running defender who was recruited by the GIANTS in 2010 as a 17-year-old priority selection.