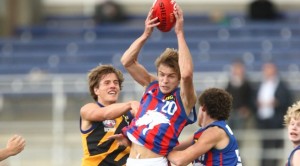 Sam Shaw from the Adelaide Football Club is the Round 21 NAB AFL Rising Star nominee.

Shaw was recruited from the Oakleigh Chargers with selection 45 in the 2009 NAB AFL Draft.

After experiencing numerous injury setbacks in his first two seasons in Adelaide, Shaw made his SANFL debut at the end of 2011 for Glenelg and represented the side in the Grand Final.

Once encountering a stretch of good health, the 21-year-olds progression earnt him an AFL debut in Round Four this year and he has played 10 AFL matches since.

The Round 21 contest against the Brisbane Lions saw Shaw responsible for the likes of Tom Rockliff and Jordan Lisle. The defender amassed 22 touches and took seven marks at the Gabba.

Adelaide coach Brenton Sanderson said Sam is reaping the rewards for his perseverance and hard work.

“We’ve been impressed with Sam. He was able to get some continuity in his training during the pre-season and earned an opportunity in the NAB Cup. Since making his AFL debut, Sam’s been really solid in defence and along with Daniel Talia, will be an integral part of our backline for years to come,” Sanderson said.

Shaw is the second Crow to be nominated this year following fellow defender Daniel Talia in Round 12.