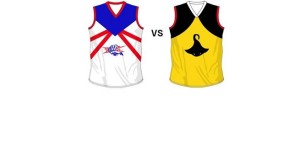 IS this the season that Dandenong Stingrays will bury its September demons?

Dandenong has been perennial finalists virtually from the TAC Cup’s inaugural season, but repeatedly they’ve walked away with broken hearts.

Four times Dandenong has made the Grand Final, including three of the past seven seasons, only to watch in dismay as the opposition celebrated premiership jubilation.

One of those clubs to inflict such a torturous outcome is Gippsland Power, the club that the Stingrays meet in the Qualifying Final.

That was in the past and both clubs will only be concerning themselves with what they can control – a direct passage to the Preliminary Final in a fortnight.

Not surprisingly, both clubs ooze class.

While Whitfield’s talents are well known – he was an All Australian at the NAB AFL Under 18 Championships - he’s not alone in driving Dandenong towards its first ever premiership.

Dandenong had 11 players in the Vic Country squad. Whitfield and Taylor Garner were All Australians, and Nathan Wright must surely have been knocking on the door.

Gippsland also had a bevy of Vic Country representatives and none better than Tim Membrey whose strong marking and four goals stood out against South Australia.

Ryley Hall is one of the best defenders in the TAC Cup and it will be interesting to see who coach Nick Stevens assigns Hall to shut down. Dandenong certainly have some key forwards in Jake Calvert and Matt Rennie.

With Country representative William Hams now back with a couple of games behind him and Nick Graham and Shannen Lange in great touch, Gippsland will be close to full strength for this enthralling final.

Gippsland belted Dandenong by seven goals in Round 2 while the Power sneaked home with a four-point win in Round 12. That match was during the AFL Under 18 Championships when both clubs were well below top strength.

Apart from that narrow loss to Gippsland, Dandenong is in as good a form as any club. They’ve won seven of their past nine games with its biggest defeat a 14-point loss to Murray in Bushranger territory.

Hard also to find fault with Gippsland’s form. Its only defeats for the season were a four-point loss to North Ballarat, a 45-point defeat by Murray and an 11-point loss to Sandringham.