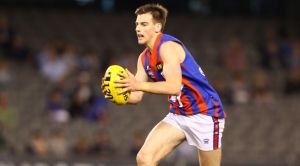 Dom Tyson from the Greater Western Sydney Giants is the Round 23 NAB AFL Rising Star nominee.

Tyson was recruited from the Oakleigh Chargers with the third selection overall in the 2011 NAB AFL Draft after representing Vic Metro at the Under-18 Championships.

He made his official AFL debut in opening round this season and has played 10 games throughout the year.