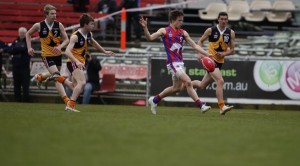 DID Dandenong Stingrays ever recover from its final quarter Qualifying Final fade out?

All the indicators suggest they didn’t as Oakleigh Chargers delivered the TKO punch that saw Dandenong disappear from premiership calculations in straight sets fashion.

After witnessing Gippsland Power surge over the top of them in a 7.3 to 0.0 final term to deny them a Preliminary Final spot, the Stingrays were always going to be vulnerable in the Semi Final.

And, that’s exactly how it panned out as the Chargers took the ascendancy in the opening quarter and did not give Dandenong a chance to get back into the match.

At no point could the Stingrays sustain a rally that looked likely to challenge Oakleigh, which has now won seven of its past nine games.

It was a numbing end to the Stingrays season, especially given they had defeated North Ballarat Rebels at both their home and away season matches and proved they could definitely match it with Gippsland.

But, football is all about the moment at hand and Oakleigh Chargers proved a far better team in most facets in the Semi Final and that’s the bottom line.

One of the most pleasing aspects for Chargers’ coach Justin Wenke is that different players have stepped up in each week of the finals.

Against Calder Cannons it was largely Will Maginness, Jason Ashby and Aidan Franetic while against Dandenong it was Ryan Exon, Luke McDonald and Keiran Nolan who shone.

Exon has been the Chargers most consistent player throughout the season as evidenced by his fourth-placing in the Morrish Medal.

He again played well as he racked up possessions and just as importantly made good use of them.

McDonald, returning after missing two games through injury, showed no ill effect to again underline his promise and potential.

Ruckman Chris Prowse, also returning from injury, paved the way for his smaller teammates at the centre bounces and stoppages.

Certainly, the versatility of Kristian Jaksch can’t be understated. In the Elimination Final, Jaksch was asked to match up on Calder Cannons’ match winner Joe Daniher, but Wenke asked him to play a different role against Dandenong.

The Vic Metro representative responded with four goals to play a significant part in the team’s success.

For the Stingrays Jason Pongracic led from the front, Robert Hill continued his good end of season form and Tim McGenniss played his usual solid game.

Unfortunately for the Stingrays, key player Lachie Whitfield had little impact, but he was not alone.