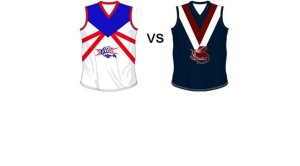 2011 TAC Cup Premiers the Sandringham Dragons have their work cut out for them this weekend when they take on Gippsland Power in a Preliminary Final.

Gippsland have been a powerhouse of the competition this season, remaining undefeated until round nine whilst spending five weeks on top of the ladder.

The Power has experienced an ideal lead in period for this Preliminary Final, with a week off after causing an upset by defeating the Dandenong Stingrays in the first qualifying match. Gippsland were down and out at three quarter time but created a seven goal to nil final term to snatch the game away from the Stingrays.

Coach Nick Stevens said that despite not having a game over the weekend, the team have maintained their regular routine and decided to rule out any extra sessions to ensure they could ‘freshen up’.

Gippsland still experienced their own high over the weekend though with inform midfielder Nick Graham being awarded as the Morrish Medallist for 2012.

Graham polled three best on grounds, and more importantly polled in three of the last four matches to win the Medal in a season where he averaged 25 disposals a game.

“Our club is very excited for Nick but it was back to business straight away, the boys have been very focussed all week,” Stevens said.

The Power have met the Dragons twice this season, sitting at one win each after Gippsland defeated Sandringham by 13 points in Round 5 and the Dragons returned the favour in Round 16 winning by 11.

“We have to play four quarters with consistent effort and intensity because they are a very good side. I feel the game will be a battle of the midfields,” Stevens said.

Gippsland have one notable change this week with the addition of Simon Deery into the team as a key centre half back.

The Sandringham Dragons finals campaign has not been as smooth sailing as Gippsland, but they have prevailed and will be no easy feat for the Power to overcome.

Sandringham drew the short straw in their Qualifying Final, coming up against minor premiers, the North Ballarat Rebels. The Dragons put forward a gallant performance but were pipped at the line by two points.

Week two of the finals saw Sandringham line up against a young Geelong Falcons team and their experience prevailed, finishing victors by 25 points.

Coach Justin Plapp was impressed with his side’s performance against the Falcons.

“From a coaching perspective we thought the commitment and effort the boys showed over the four quarters was very pleasing. Our defensive pursuits were also a positive to come out of the game. Our key indicators were all at a level you need to be at to compete in finals football.”

Sandringham has taken a lot from their Round 16 contest against Gippsland and will be prepared accordingly.

“They are a very big bodied and physical team that relish the contest. They have a good forward line that can be very dangerous if given space.”

Like Stevens, Plapp believes this match will be won or lost through the midfield on Saturday.

“We believe if we can have an even contribution across the board with our effort it will be defiantly game on. Both sides are very talented through the midfield, so contested football and stoppages will defiantly be a focus for us,” Plapp said.