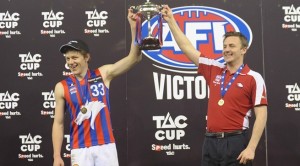 Oakleigh Chargers have been crowned the 2012 TAC Cup Premiers after fighting out a tight final term with Gippsland Power to win by 1 solitary point. A behind to TAC Medallist Jackson Macrae gave Oakleigh the score they needed to clinch the premiership, just 32 seconds into the golden score period with scores locked at the end of regulation time.

The final quarter may have brought back bad memories for Oakleigh from 2011 when they saw Sandringham run over the top of them if the final term, as Gippsland kicked four of teh first five goals of teh final term to lead by 11 points. The Chargers have had to wait another 12 month for redemption, and whilst the coach and 75% of the playing stocks have changed, the 2012 lineup were able to over come an eight goal to three second half by Gippsland to record their 2nd ever TAC Cup title.

Oakleigh Chargers Jackson Macrae was awarded the TAC Medal for best on ground in the Grand Final.