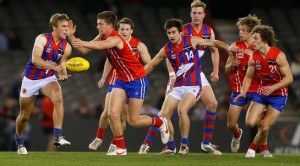 In a frenetic high stakes TAC CUP Grand Final, the Oakleigh Chargers triumphed by the narrowest of margins over the Gippsland Power - one point. The game went into extra time for 32 seconds after scores were level at full time and a golden score was needed to break the deadlock. The Chargers Jackson Macrae, winner of the TAC Medal for best on ground, kicked a point which triggered the siren to move away from the 81 all deadlock and give Oakleigh a 1 point win as Davis Harrigan reports.

The Chargers led the attack early. The 194cm Kristian Jaksch provided a strong lead up forward, finishing the match with two goals, and looks to be very promising in the upcoming AFL draft in November. The Power brought the lead back to just one point at quarter time with some beautiful plays setting up goals to Simon Deery, William Hams and Captain Tim Membrey, who finished with four goals in an outstanding leadership role.

Oakleigh began to open a hole in the lead in the second term, with all the run going through the corridor, and pierced the Power defence time and again. Jaksch was once again into the action, as well as Jay Kennedy-Harris, whose midfield run, along with Macrae, allowed the Power (1 goal for the quarter) only minimal opportunities to score. A dropped Gippsland Power mark 18 minutes in gifted Charger Tom Cutler an easy goal, and the Chargers went into the main break with a 20 point buffer.

The Power lifted in the third, turning the tide and running rings around Oakleigh. Josh Scott booted two goals, including a snap out of a pack nearing three quarter time. Josh Cashman and Anthony Tipungwuti began to put their stamp on the game, Tipungwuti’s incredible speed and high flying provided a worthy highlights reel. Nicholas Graham was also a prominent Power player around the ground, and finished the match with three goals.

With the margin at eight points at the commencement of the last term, the Power came out and threw everything they could muster at the Chargers. It paid off. Membrey kicked another two goals, all at crucial stages. The Power jumped out to a 12 point lead halfway through the quarter, but goals to Ned Walmsley and Tim MacMillan locked the scores with seconds left on the clock.

The golden moment came when the Chargers found themselves in free space. Macrae received, but skewed the kick. It was, however, enough to give the Chargers the win, and the premiership with a behind.

For the Power, after having come so far, the one point loss struck a bitter blow. However, coach Nick Stevens, while disappointed, heaped praise on his players.

“It’s disappointment, no doubt. I’m shattered for the boys, they’ve had an outstanding year, and to come so close it really hurts. But I said to the boys we gotta celebrate the year.

“Our ability to fight back and show a lot of character against a quality side like this, we were just unlucky to lose.”

The Chargers, beaten by the Sandringham Dragons in last year’s Grand Final, were able to seek redemption at the last moment of the game. Captain Ryan Exon led from the front, with the Chargers side comprising of 17 and 18 year olds, with 203cm Chris Prowse the oldest in the squad. Macrae’s draft hopes have been given a sky-rocketing boost with his 26 possession effort. Not one member of the 2012 premiership side played in the 2011 premiership.

After the euphoria of the premiership wears off, the Chargers will head into the pre-season with a bout of confidence. The Power’s incredible season, under Stevens, in his first year, surprised many. With a young list of players, including Edward Morris and Aaron Heppell, the future looks bright for Gippsland.