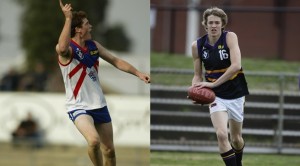 The 2012 AFL Grand Final is awash with former TAC Cup players from various years of the competition. The strength of the elite Victorian Under 18 competition is evident with 23 former players taking to the MCG this Saturday in the biggest match of the year.

Although the Sydney Swans enter the encounter as an interstate team, twelve past TAC Cup players will lead their side onto the field.

Historically in the zoning days the Hawthorn Football Club recruited from inner eastern suburbs such as Kew, Camberwell and Box Hill as well as Country regions from Gippsland to Moe.

In modern day football players are sought after from across the Country and increasingly from around the world.

Despite this fact, Hawthorn will be entering the 2012 AFL Grand Final with eleven former TAC Cup footballers taking to the field, highlighting the depth of talent that exists within Victorian backyards.