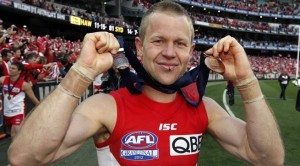 In a match that saw 23 former TAC Cup players take to the field, the odds were in favour that one would be selected as the Norm Smith Medallist. It was past Calder Cannon’s player Ryan O’Keefe that stood up to the occasion, being acknowledged for his best on ground performance in the AFL Grand Final.

O’Keefe was recruited from the Cannons with pick number 56 in the 1999 NAB AFL Draft, making his way to New South Wales to represent the Sydney Swans.

The dominant midfielders’ performance rose to another level in the final quarter when he led the Swans into their relentless fight back from a 12 point deficit.

O’Keefe exemplifies the modern day footballer. In the Swans 2005 premiership, the then 24 year old was known for his work in the forward line. However, in recent seasons O’Keefe has transformed himself into a versatile midfielder.

No doubt his knowledge and experience across all areas of the ground earnt him the Norm Smith Medal.