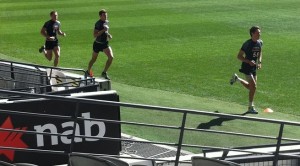 The NAB AFL National Draft Combine was completed today at Etihad Stadium. The four days of testing concluded today with a 3km time trial which saw a number of TAC Cup players again lead the way.

None shone more than Sandringham Dragons Josh Kelly who recorded an impressive time of 9 minutes 48, just 11 seconds outside of the Combine record by Tim Houlihan in 2006, who was drafted to West Coast. The time was also inside the best times of 2011 recorded by Hawthorn recruit Brad Hill and GWS recruit Will Hoskin Elliott and 9m52 and 9m53 respectively.

There were four 3km trials, with Murray Bushrangers Tom Clurey coming in second to Kelly in the third trial and also second overall with 10m01. In the same trial North Ballarat Rebel Tanner Smith came third and recorded the seventh overall time.