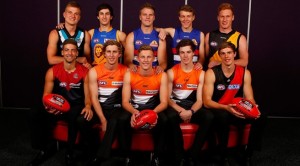 AFL Victoria is particularly pleased to again see over half of the new talent selected in the NAB AFL Draft come from Victorian football.  36 Victorian players were selected in the NAB AFL Draft, with 33 players recruited from the TAC Cup competition and three from the Peter Jackson VFL. Victorian community football and the talented player pathway produced 55% of new draftees while South Australia produced 21%, Western Australia 18%, Tasmania 5% and Queensland 1%.

Over the next week on taccup.com.au we will go through a club by club breakdown of draftees, looking at player stats and highlights of each of the 33 TAC Cup competition draftees, with comments from their new AFL club as well as from their Regions Talent Manager.

“The NAB AFL Draft continues to highlight the variety of pathways in which talented players are being developed in Victoria, starting at a local community Club level and working their way up through the talented player pathway either via the TAC Cup or VFL competitions.”

Victoria produced eight out of the first 10 selections (pictured), with Dandenong Southern Stingrays Lachie Whitfield becoming the eleventh number one pick from the TAC Cup competition in its 21 year history, and the fourth Dandenong top pick. Whitfield joined the likes of former Stingrays Jeff White (1994), Travis Johnstone (1997) and Tom Scully (2009) all of whom had their name read out first on AFL Draft night.

“The TAC Cup competition continues to be the premier drafting ground for AFL footballers, with over 1,000 players having now been drafted over the 21 years of the competitions existence.”

“Congratulations should go to each of AFL Victoria’s Talent Managers who manage quality programs in each of Victoria’s twelve regions that field teams in the TAC Cup competition.  Also, congratulations and well done to the local community Clubs that helped start the football journey for these 33 players who will next year take the leap into the ranks of the AFL.”

“This year’s three VFL draftees again prove that the “draft window” does not close if a player is not drafted after their 18th year.  If a players time in the TAC Cup competition comes to an end, graduating to the VFL competition is another potential avenue for players that still dream of becoming an AFL footballer.”