Cannons Lead The Way With 7 Draftees 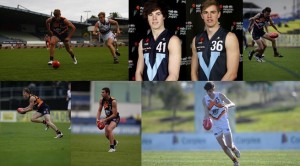 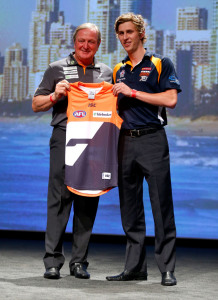 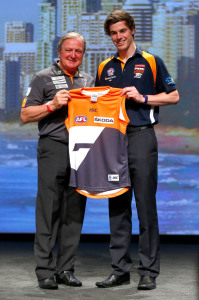 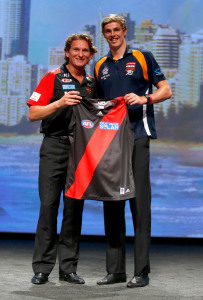 In a number of firsts for the Cannons, the region recorded their most top 10 draft picks, with three players - Jono O’Rourke (2), Lachie Plowman (3) and Joe Daniher (10) – selected in the top 10, surpassing their two top 10 picks in 2003 of Brock McLean (5 to Melbourne) and David Trotter (9 to North Melbourne). 2012 also produced the Cannons highest ever draft pick at number two, with Sydney’s selection of Mark Kinnear at pick four in the 1996 draft having been their highest selection despite over 60 players having been picked from the Cannons in the National Draft over 21 years.

Calder Cannons Talent Manager Ian Kyte believed the draft played out as expected for the Cannons, with the staff at the club to be acknowledged for their efforts during the year.

“The draft was pretty much as expected.

“Atkins went a bit later than we thought but the rest were around the number anticipated.

“It is a great reward for all of our staff's hard work and dedication throughout the year.”

When asked about the draftees specifically, Kyte had the following to say about each of the Cannons picks.

“O'Rourke is an inside midfielder with great poise and elite ball use.

“Plowman is a tall back and he reads play very well. May become a midfielder at AFL.”

“Daniher is a tall forward very good mark and very good below knees for his height.”

“McBean’s a tall forward/ruck who is very skilful and a reliable goal kicker.”

“Dick has elite speed and is capable of breaking lines from half back or a wing.”

“Atkins is a mid forward/ midfielder and a great mark for his size.”

“Gregory is a developing tall backman with elite speed. His selection was a bonus as it was his first year in the system after coming from an elite Tennis background.”

The GWS Giants selected their first ever Cannons players in the draft, and picked O’Rourke and Plowman at two and three. GIANTS National Recruitment and List Manager Stephen Silvagni said he was delighted with the players the club had selected and they would compliment the GIANTS exciting young list.

“We always said we wanted to select the best available talent and with six of the first 27 selections, including the first three picks, we believe we have done just that," Silvagni said.

“We have recruited an excellent mix of midfielders, forwards and defenders and together with our existing talent makes for a very exciting future for the GIANTS.”

“Obviously Joe Daniher gives you a great start with potentially the best player in the draft,” he said. Essendon list manager Adrian Dodoro agreed. “It's great to finally get him (Daniher) on the list. It's taken a while – it feels like he's been on the list for the last two years.

“But he's an amazing young man, a great talent. It's quite rare the way he draws the ball for a tall. We think he's going to have a great future with us for a number of years.”

Dodoro was also pleased to be able to add Gregory to the Bombers list.

“He's raw and he's very, very light, but he's got a lot of X-factor. People are going to say that he's a Dustin Fletcher clone. He's almost 200cm and he does some incredible things. But he is under-developed and Essendon fans are going to have to be a little bit patient with this guy.

“However, we think he is a very talented and exciting player. He has an uncanny ability to spoil, which is unusual for a young tall defender. And he's got amazing agility. He's very, very good at ground level. He just needs a body, and that's going to be our responsibility to get him a lot stronger.”

Adelaide National Recruiting Manager Hamish Ogilvie was happy to get Atkins so late in the draft.

“Rory’s got a bit of spunk and cheek about him,” Ogilvie said.

“Rory is very talented, but things have probably come easy to him. He’s just starting to learn how to work hard now after a few kicks in the pants. He’s had his ups and downs, but he’s been up for the last half of the season and played really well.

“He still has a bit to learn about the work required to play at AFL level, but you can’t beat talent.”

Richmond recruiting manager Francis Jackson had the following to say about Liam McBean.

“He's unusual for a ruckman because he's an outstanding kick, so you actually want the footy in his hands. He's a terrific goalkicker with a high conversion rate inside 50 and makes really good decisions.

“Like most young ruckmen, he's going to take a while. He's 86kg and put 6kg on this year but obviously needs to be up near the 100kg mark. His mobility for his size was underlined when he played centre half-back against WA at the national championships.”

Sydney Swans Recruiting and List Strategy Manager, Kinnear Beatson was pleased with their final pick in the draft "He (Matt Dick) played a lot of soccer as a junior, but he has also played a lot of football. For Vic Metro this year in the last couple of rounds he was asked to play fullback, which isn’t really his cup of tea because he’s a quick player, who kicks the ball with plenty of penetration, he’s strong through the core, so we’re excited about Matty."