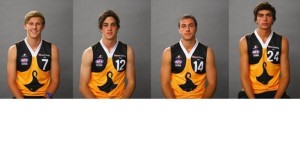 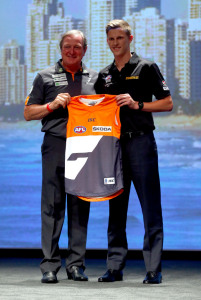 Dandenong Southern Stingrays continued their recent average of three or more picks at the AFL Draft since 2007, with four Stingrays players this year making their way into the ranks of the AFL. After much talk over the last 12 months at his potential to go number one in the draft, Dandenong Stingrays Lachie Whitfield’s selection was confirmed as the top pick last Thursday by GWS Giants.

Whitfield became the eleventh number one pick from the TAC Cup competition in its 21 year history, joining the likes of three former Dandenong players in Jeff White (1994 – who has played the most AFL games of any Stingrays draftee at 268), Travis Johnstone (1997) and Tom Scully (2009), as well as other names such as Jonathon Patton (Eastern Ranges 2011), Brendan Goddard (Gippsland Power 2003), Josh Fraser and Brett Deledio (Murray Bushrangers 1999 & 2004), Matthew Kruezer (Northern Knights 2007), Marc Murphy (Oakleigh Chargers 2005) and Jack Watts (Sandringham Dragons 2008).

Dandenong Stingrays Talent Manager Mark Wheeler said the club was pleased to have three first round selections, including the number one pick.

“As a club the Dandenong Southern Stingrays are very happy to have 3 players drafted in the first round, with Lachie Whitfield taken at number 1 making it number 4 for the club in 21 years.

“Lewis Pierce taken late is a great reward for Lewis and the club after working with him closely over the past 3 years to manage his immature frame, as well as exposing him to clubs and recruiters.”

Wheeler believes the overall result is a credit to the competition and its ability to develop talent, especially with the reduced selections in 2012.

“AFL Victoria and the TAC would be very happy with the number of players drafted given the limited amount of picks in the 2012 NAB AFL Draft.

“There will be reduced picks in the upcoming pre season and Rookie draft, which will result in many disappointed but talented young men in the TAC Cup who will miss out on their opportunity this year,” Wheeler said.

“It will be a great test of their character for most of them when they have to pit themselves against listed AFL players in the VFL in 2013.”

Wheeler had the following to say about each of the clubs four draftees:

Lachie Whitfield: “Rolls Royce player who has the running ability to mix it with the elite runners currently in the AFL. He is an elite kick on both sides who has the ability to read the play before it unfolds. He can play inside or out and is very deserving of being the Number 1 draft in 2012.”

Nathan Wright: “Readymade in size and fitness to play AFL. His ability to run straight and through packs is his strength and courage could never be questioned. In the system he will become a very good running back player who could transition into a midfielder. Future leadership material.”

Taylor Garner: “A very smart player with very good agility and work rate. Can play as a second or third forward or as a running half back flanker. His strength is his ability to make the contest and stick the marks and give numerous leads. The call to get his loose shoulder fixed early didn’t inhibit his draft chances.”

Lewis Pierce: “Project Ruckman who loves to kick a goal. December born so basically a 17 year old in the TAC Cup in 2012. One of the smarter Rucks who have been through the program, with positioning around the ground outstanding. Will need to add kilograms to his skinny frame before he plays AFL.”

After the draft, each of the AFL Clubs gave their thoughts on their new draftees, here are their opinions on the Dandenong players they recruited.

GWS Giants list manager Stephen Silvagni on Whitfield. “We thought he would be No.1 early. We've been watching him for two years and he brings skill and work ethic, and he's an elite runner and an elite kick.”

North Melbourne’s Recruiting Manager Bryce Lewis had the following to say regarding Garner. “Very strong overhead but equally capable at ground level. Had a really big impact for Vic Country in their national championship game against WA at Subiaco.

“He was very impressive that day, kicked three and set up a number of others. He played out the Nationals but had a crook shoulder and shortly after went in for surgery so he only played half the season. He puts on good pressure in the forward half, but we think he can develop into a midfielder and have an influence at stoppages.

“We were very happy with what we saw and quite pleased to pick him at that selection.”

St Kilda’s Head recruiter Tony Elshaug made the following comments on Wright: “He suffered a broken finger at the start of the year but he came into the championships probably a fraction underdone but he did a good job and fought the fight throughout the whole carnival and got better and better. At the end of the year he hurt his hamstring but he was still able to do some good testing at the combine.

“He’s got good speed, good endurance and he is a very tough competitor. He is very good overhead and a good, strong person. We are very pleased to have him. His best football seems to be at half-back at the minute and he can play on the wing.”

St Kilda’s Head recruiter Tony Elshaug made the following comments on Pierce: “We think he’s 203cm and he’s still growing we think. He was a teammate of Nathan’s at Dandenong Stingrays and he has had a tough year. He played through adversity with injury. He had knee tendonitis at the start, came into the championships and held his own against the best ruckmen in Australia. He broke his thumb just after the championships but fought his way back to play through adversity again and did a good job.