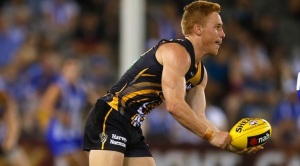 Week two of the competition saw eight players make the leap into the next level of football for Carlton, Greater Western Sydney, Melbourne, Richmond and Sydney.

Father-son recruit Jack Viney from the Oakleigh Chargers made his much awaited transition into the AFL for Melbourne on Friday evening amassing 10 disposals and gathering six contested possessions against North Melbourne and Richmond. His aggressive nature on the field and ability to shake off some heavy knocks puts him strides ahead of many first year players.

Viney was not the only shining light for the evening with Nick Vlastuin being named in the best for Richmond. Vlastuin, a former Northern Knights player and Captain of the Vic Metro side last year has been touted for a first round debut for the Tigers. Accumulating 15 disposals, eight contested possessions and two centre clearances, Vlastuin was a significant force across the ground.

Number one draft pick, Lachie Whitfield from the Dandenong Stingrays also made his first AFL appearance, lining up for Greater Western Sydney. Playing just one match at Blacktown International Sportspark in Sydney, Whitfield finished the day with seven disposals and three marks against Carlton.

Teammate Lachlan Plowman originally from the Calder Cannons, took part in the alternate game for GWS against Sydney. Plowman only tallied few disposals but it was his extra efforts that impressed onlookers.

The Sydney Swans provided three 2012 TAC Cup players with the opportunity to represent the club for the first time on Sunday. Jake Lloyd (North Ballarat Rebels), Tim Membrey (Gippsland Power) and Xavier Richards (Sandringham Dragons) each made the most of the occasion against Carlton and GWS.

2012 Morrish Medallist Nick Graham was the eighth TAC Cup player for the weekend to make his first appearance in AFL colours. Graham, a product of Gippsland Power was recruited by Carlton in the 2012 NAB AFL Draft and took on GWS last Sunday. Gathering five disposals, two contested possessions and two marks, Graham was in and amongst the play whenever possible.