Oakleigh Up For Challenge 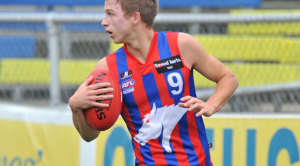 After conquering the TAC Cup and producing four NAB AFL draftees, it would be easy to forgive the Oakleigh Chargers for resting on their laurels.

But with the same exuberance that saw them storm from sixth on the ladder to the 2012 TAC Cup flag, the Chargers are back with ambitious plans for the season ahead.

Talent manger Mark Smart said the region was rapt to see Jackson Macrae (Western Bulldogs) Kristian Jaksch (GWS), Jack Viney (Melbourne) and Jason Ashby (Essendon) given a chance at the elite level but had other reasons to be proud of last year.

“We fielded 67 players over the course of the season and it’s fantastic to be able to give that many young men an opportunity to play TAC Cup footy,” he said.

“We’re certainly not dwelling on last season and with so many fresh faces, who are keen to reach their own team and individual goals, it’s not hard to be motivated.”

Smart said the Chargers’ top end talent, including AIS Squad members Jack Billings and Tom Cutler were really impressive but so too was the regions’ depth.

“We’ll have Jack and Tom for Round 1 but then won’t see them again until about Round 13,” Smart said.

“The other boys who played in our premiership: William Maginness, Jay Kennedy-Harris, Aidan Franetic and Mitch Donoghue will be a pretty important part of our side this year.”

Smart said exciting indigenous trio Kennedy-Harris, Elijah Edwards and Darren Allan were lighting up the track with their skills in the pre-season.

He also tipped ruckman Angus Milham, who at 19 stands 209cm tall, to be another to attract attention as the tallest player in the competition.

Chargers coach Justin Wenke, who took the reins on the eve of the 2012 season, is back at the helm this year and Smart said was enjoying a more extensive preparation.

“Justin came into the role pretty late in the pre-season last year and just because of that I’d say we’re miles ahead of where we were at the same point last year,” he said.