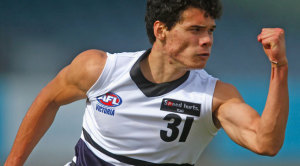 The Northern Knights have taken the first step in putting a disappointing 2012 season behind them with a hard-fought win over the Calder Cannons in Round 1 of the TAC Cup yesterday.

The Knights kicked nine goals to four in the second half to turn a nine point half-time deficit into a 15.7.97 to 11.9.75 victory.

Despite six goals to small forward Josh Cauchi, the Cannons had no answers when the Knights put the foot down in the final term.

Half forward Hugh Curnow (pictured) was instrumental in the surge and when his checkside effort from deep in the forward pocket found its mark, the Knights were home.

A big bomb from Marcus Bontempelli put a full stop on the contest and was indicative of the how the Knights saluted.

While both teams enjoyed plenty of time in possession, it was the Knights’ better ball users that eventually wore down the Cannons’ resistance.

Running defender Julian Soccio and captain Jake Kalanj were others to impress, with the skipper setting the tone early with several courageous acts.

For the Cannons it was key position talent Jake Owen who shone, taking 10 marks and collecting 25 possessions.

Owen, who turns 19 in November, limped off late in the match but was the dominant big man on the ground.

Cauchi also put his name into the mix with almost the perfect small forward’s game.

The 170cm live-wire bagged the first two goals of the match and looked dangerous throughout.

Midfielder Anthony Prestia finished with 25 disposals, 11 of them contested, while Jake Lever was solid down back to finish with 19.

The Cannons have a chance to chalk up their first win of the season when they tackle the Oakleigh Chargers this Sunday at Highgate Recreation Reserve in Cragieburn.

The Knights face the Western Jets back at Visy Park on Sunday, hoping to post consecutive wins and get their season off to a flyer.