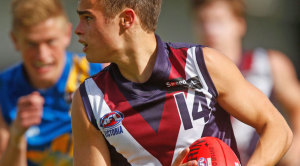 The Sandringham Dragons appear one of the teams to beat this season after dispatching the Western Jets yesterday at Visy Park.

Like a learner driver searching for fifth gear, the Dragons showed glimpses of their best but never quite hit their straps on the way to a 16.9.105 to 12.10.82 victory.

In a lively opening the Jets kicked the first two goals of the game, before Dragons’ forwards Alexander Spencer and Max Hayes helped wrestle back the momentum to take a 7-point lead into the first change.

The second quarter was all the Dragons as Justin Plapp’s side found their run and carry to sprint clear of the Jets.

Silky midfielder Christian Salem was all class picking up 16 touches for the half, while Spencer added his third to capitalise on the work of the Dragons’ engine room.

The Jets had their moments, with a running goal from forward Harrison King the highlight, but when Dragons’ small Luke Marchetti kicked truly after the half-time siren the margin was out to 34 points.

The script it seemed was written and most expected the Dragons to extend their lead with a dominant second half.

The Jets, however, had other ideas and two quick goals to small forward Pele Manivonng had them back in the hunt.

Captain Brett Bewley and on-baller Jake Greizer were crucial in keeping the Jets in the contest and when Mitch Norton marked and goaled mid-way through term, the margin was back to 21 points.

The Dragons steadied through two goals to Karl Amon (pictured) and despite over-using the ball at times looked the more dangerous side going forward.

The final term dished up much of the same as the Jets and Dragons traded blows in a somewhat scrappy finish.

Amon collected 20 disposals and finished with three goals in a best-on-ground performance, while Zachery Merritt and Hayden Whitehead played their part in keeping the Jets at bay.

Hayes notched four goals and King three for the Jets but both found the going tougher after their initial bursts.

The Dragons now face Round 1 winners the Eastern Ranges this Sunday at Visy Park, while the Jets will run out in the early match against the Northern Knights at 10.30am.