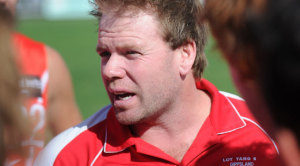 It’s been an interesting summer at the Gippsland Power where a grueling-pre-season camp took on a whole new meaning.

The Power squad was enjoying a tough get-away when the high country fires burnt to within 100m of the group.

Players and officials had reached the top of the 22km Razorback Trail on Mt Feathertop when the fire advanced quicker than earlier expected.

With staff in close contact with emergency authorities, the decision was made to evacuate to Hotham Village, 15 people at a time, via helicopter.

“It was certainly an interesting experience for everyone involved,” Power coach Nick Stevens said.

“I think more than anything it bonded us closer together.”

Thankfully the remainder of the pre-season has been relatively smooth sailing for last year’s grand finalist.

Setting the standard has been Josh Cashman, who returns as captain under the rule that allows boys turning 19 this year another chance at TAC Cup level.

“Josh has had a fantastic pre-season and is super-fit. He’s a super trainer who is basically unbreakable and we think will make a great captain,” Stevens said.

“We’ve got a really good group of 19-year-olds with Josh Scott another who we’re hoping takes the next step.”

“He’s mobile a centre-half forward, who I think was really unlucky to be overlooked in last year’s draft.”

Leading the way for a large contingent of bottom-age talent is skillful left-footer Lukas Webb.

The Power take on the Dandenong Southern Stingrays in their first encounter of the home-and-away season at Morwell, this Saturday.