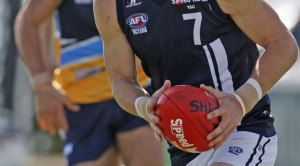 An impressive crop of top-end talent looms as both a blessing and a curse for the Geelong Falcons this season.

The Falcons have five players in the AIS AFL Academy programs and a number of others who are expected to figure for Vic Country in the NAB AFL U18 Championships.

Talent manager Michael Turner said he believed this year’s squad had the potential to be the best the Falcons have produced in a long time, but a lot would depend on the availability of players.

“With the AIS guys, school footy and of course the Vic Country stuff, we might have weeks where we’re missing between 10 and 20 players,” Turner said.

“Ultimately our success will be measured on how many boys are drafted and not how many games of footy we win.

“It also means all 51 players on our list are likely to get a chance to impress at some stage.”

Such was the Falcons’ bottom-age talent last season that 15 players who enjoyed finals action will be back this year.

Taylor and Tsitas will be a formidable midfield combination when available with both possessing tremendous skills to capitalise on their possessions.

Turner said Gardiner and Bourke were more likely to take up residence on the flanks and were expected to attract plenty of attention from AFL recruiters.

But arguably even more exciting than the star-quartet is Hugh Goddard, the cousin of former number one draft pick Brendan Goddard.

The supremely talented play-maker is an emerging star in the bottom-age AFL AIS Academy and is already considered one of the brightest prospects in the country.

Deniliquin’s Doug Bond is another expected to figure heavily and is already a member of Greater Western Sydney’s Academy.