Rebels in search of positive start 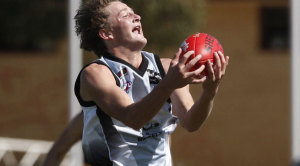 The North Ballarat Rebels will take to the field this weekend with ambitions of emulating a highly successful 2012 campaign.

While the Rebels fell to the Oakleigh Charges in last year’s first preliminary final, six Rebels finished the year on an AFL list.

Dom Barry and Jake Neade avoided the draft-hype as pre-selected players that saw them land at Melbourne and Port Adelaide respectively, while Tanner Smith (Fremantle) Michael Close (Brisbane) and Martin Gleeson (Essendon) were snapped up on draft day.

The last piece of the puzzle saw 19-year-old Jake Lloyd picked up by the Sydney Swans in the NAB AFL Rookie Draft.

Rebels talent manger Phil Partington said Lloyd was another example of the value of the 19-year-old player rule that allows boys, who might need another year of development, to remain in the TAC Cup.

“This year in that category we’ve got Kyle Hendy - a ruckman that finished last season off really well and gets better every week he’s on the track, along with Lewis Herbert and Lachlan Cassidy,” he said.

“It was Lachie’s first year in the program last season and he’s very good decision maker, who never wastes and opportunity.

“I know a few clubs had a look at him and with another year in the program he might come under consideration again.”

The Rebels have two members in the AFL AIS Academy and both are likely to attract plenty of attention from opposition sides and recruiters alike.

Matt Crouch, the brother of Adelaide’s Brad, won many admirers last season for his performances with the Rebels and Vic Country, while Dallas Willsmore will provide the x-factor up forward as a mobile target.

Another Rebel with talent galore is on-baller Matt Short, who will depart this month for a tour of New Zealand with the Australian U19 cricket side.

The Rebels kick start their 2013 campaign with a clash against the Bendigo Pioneers on Easter Sunday and Partington said any thoughts of last year are long forgotten.

“Last year is really irrelevant, it’s time for the Rebels of 2013 to make their mark,” he said.