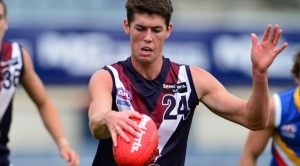 Sandringham Dragons finished round two undefeated and on top of the TAC Cup ladder after triumphing over the Eastern Ranges.

Overcast conditions and intermittent light rain made for a low-scoring TAC Cup contest at Visy Park on Sunday as the Dragons were made to work hard for the four points, winning 10.10.70 to the Ranges 7.7.49 as Davis Harrigan reports.

Scrappy play and tight contests meant that the quarter time margin was just eight points in favour of the Dragons, with only three goals kicked. After a goal in the first five minutes to the Ranges Michael Apeness, the only other majors went to Tom Wilkinson (three for the match) and Malcolm Neiwand from the Dragons. The ability to get the ball out of the pack was lacking, and no one found a major break to put their team out in front.

The second quarter saw the Ranges Jordan Walker really make an impact on the game around the contests (and a goal) despite the Dragons posting a three goal to one for the term. Dragons defender Lachlan Howes was instrumental in driving the ball out of the backline not only in the second quarter but the entire game, and goals to Wilkinson, Nathan Freeman (2 majors) and Alexander Spencer gave the Dragons a 21 point buffer at the main break.

A light shower again made conditions difficult to control the ball, but the Ranges mission to cut the Dragons lead back started successfully. Two goals to Christian Petracca (a standout for the Ranges) and one to Daniel Welsh saw the Ranges peg the lead back to just three points. The Dragons however stemmed the tide with a run down the centre and a goal to Sean McLaren.

The highlight of the quarter belonged to young Eastern Ranges player Andreas Roth, who picked the ball out of the pack, spun around and threw the ball onto his boot across his body to kick a brilliant goal, receiving a big cheer from his teammates.

Unfortunately for the Ranges, the Dragons found the extra gear they had been searching for all day to get on top, with Wilkinson bagging his third. Goals from Mirams and Freeman sealed the deal.

Dragons coach Justin Plapp was happy to get the win but said there was plenty to improve on, especially the consistency of the team.

“We’re confident in our structures and our set up…With kids at times, they do drop in their intensity. Sustaining effort for the four quarters is the biggest thing for me.

“Leadership becomes really important (for the players) and when the game gets tough, there’s more to it than just playing well.”

There were plenty of players in Plapp’s mind who were keys in the eventual result, including Howes, fellow defender Karl Amon, and under-ager Tom Wilkinson.

Having finished last in season 2012, signs look positive for the Ranges in 2013 with Ben Cavarra, Petracca, Walker, Apeness and Connor O’Sullivan all finishing as standouts on Sunday.

The Ranges will host the Dandenong Southern Stingrays at Bayswater on Saturday, while the Dragons will travel to Craigieburn to clash with the Northern Knights.