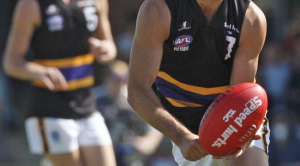 Murray Bushrangers have pushed their way into the TAC Cup top eight with a 40 point victory over the Bendigo Pioneers last Saturday. TAC Cup action headed to Shepparton’s Deakin Reserve, and it was the Bushrangers who led from start to finish recording their first win of the season, 7.12.54 to Bendigo 3.4.22 as Darren Edmondston reports.

Right from the opening bounce Murray jumped Bendigo and applied fierce pressure to the Pioneers when they were in possession of the ball. It wasn’t long before that pressure turned into the first goal to Jydon Neagle who took a strong mark up forward.

The Bushrangers and Neagle quickly posted their second, with Max King and Bryden Squire giving Murray first use out of the middle.

Inaccuracy hampered both sides in the first term, with Bendigo made to pay for three straight misses on goal late in the term, as Michael Gibbons kicked truly for Murray just before the quarter time siren to give his side a 21 point lead.

It was a case of déjà vu for Bendigo in the second term as the Bushrangers continued to put pressure on the Pioneers and forced a number of turnovers. The class of Gibbons was starting to show as he positioned himself perfectly for a front and square goal and his second.

Bendigo to their credit continued to work hard and their key play makers were starting to lift in Harry O’Meara and Jacob Chisari. Blake Poyser marked strongly up forward and converted the Pioneers first goal for the day but that seemed to kick start the Bushrangers again. They replied in quick fashion after a determined chase and tackle from Neagle who snapped truly, and he was involved again minutes later handballing to Elijah Wales who kicked his first and Murray’s sixthfor the game and gave them a 34 point half time lead.

Murray struck first again in the third term through Ryley Norris who was starting to find space across half forward. Bendigo weren’t done with yet and showed great determination to push the ball forward and kicked two in a row through Jaden McGrath and Brandon Spurr to keep the margin at 32 points at three quarter time.

Fatigue started to play its part in the warm conditions and after the initial arm wrestle out of the break Murray controlled the quarter, scoring the only goal of the term to King.

Neagle finished with three goals for the Bushrangers, whilst Gibbons was amongst the best with two goals.