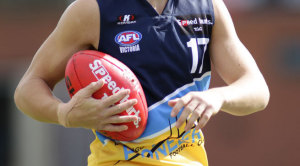 All eyes were on Bendigo today for the TAC Cup Country Round in which the six regional-based sides came together for a triple header.

While all three games were decided by big margins, there were a host of individual performances from every side that kept on-lookers glued to the field.

Nine goals to key forward Josh Scott fired the Gippsland Power to a commanding 104-point victory over the Bendigo Pioneers in the first match of Country Round.

Scott wash one of a host of stars for the Power, with Ben Kearns bagging four majors and Alex Carr and Alex Saunders finishing with three each.

Harry Conway was the sinning light for the Pioneers with two goals and a hand in two more, while the Power had a team full of contributors.

Carr was as good as any, hitting the packs hard and kicking a contended for goal of the day from tight on the boundary in the final term.

Kearns, who bagged 4 goals playing for the Casey Scorpions last week, came to life after a quiet first half with three goals in the third term, while Scott showed his skills both in the air and on the ground.

The North Ballarat Rebels are still winless this season after falling to the Murray Bushrangers in by 46 points.

The Bushrangers looked too slick from the outset with Jarman Impey dominating early and bagging two of the first three goals of the game.

Although his contribution diminished as the match wore on, the elusive forward finished with four goals, matching the effort of key forward Jydon Neagle who also bagged four.

The standout for the Rebels was Louis Herbert, who started down back and moved into the midfield in the second half and never stopped trying.

On-baller Lachlan Cassidy lifted in the second half to bag two goals and live-wire Keegan Mellington finished with three, but they were overwhelmed by a committed Bushrangers’ outfit.

Nathan Drummond, Nick Holman, Jade Cleeland and Michael Gibbons all made significant to help their side post a second consecutive victory.

The Geelong Falcons made it three from three with an easy 65-point victory over the Dandenong Southern Stingrays in the final game of Country Round.

Mobile big man Fraser Fort booted four goals and could have had more had he kicked straighter.

But Fort was one of many who pressed their case for Vic Country selection, with Hugh Goddard, Patrick McCartin, Jacob Sharp, Scott Dixon each botting two of their own.

Zak Jones was one of the only Stingrays to put in a four-quarter performance, while returning star Daniel Capiron showed glimpses of what he is capable of.