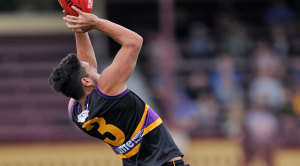 The North Ballarat Rebels’ poor start to the season continued on Saturday with a 46-point loss to the Murray Bushrangers at Bendigo's Queen Elizabeth Oval, as Shane Goss reports.

The Rebels were held goalless in the first half and, despite outscoring the Bushrangers in the second– albeit by one point – succumbed 12.18 (90) to 7.6 (48).

Kicking into a strong wind in the first term, the Bushrangers quickly asserted their presence around the ball with the likes of Jarman Impey, Nathan Drummond and Michael Gibbins finding plenty of the Sherrin.

Their intensity at the ball was far stronger than the Rebels, with Impey's two goals helping set up a 22-point quarter-time lead.

Strong defence and tackling pressure ensured the Bushrangers remained on top in the second term, extending their lead to 47 points as the Rebels struggled to find an avenue to goal.

Kieran Ellis and Patrick Sullivan were stingy in defence for the Bushrangers and were well supported by James Martyn and Jade Cleeland.

For the Rebels, Sam Hooper was trying hard to provide a target in the forward 50 and Keegan Mellington was lively at times.

But without the efforts of Louis Herbert down back, the Rebels may have found themselves even further behind at the main break.

Coach David Loader was clearly unhappy with his side’s effort and responded by taking his charges behind closed doors during the interval.

Whatever was discussed worked, as shortly after the re-start the Rebels kicked their first major through Sam Bennett and replied again soon after when Mellington marked and goaled.

Rebels’ midfielder Lachlan Cassidy continued the mini fight back when he conjured another goal minutes later and, for the first time in the match, the Bushrangers didn’t have it all their own way.

But against the run of play, Jydon Neagle marked strongly and goaled for the Bushrangers to ensure his team enjoyed a lead of 36 points at the final change.

In the final quarter the Rebels again showed determination to stay in the match with goals to Mellington and Cassidy – who was getting better as the game wore on.

Goals to Neagle, his fourth for the afternoon, and ruckman Max King reasserted the Bushrangers’ dominance and the final margin of 46 points could have been greater had Darren Ogiers’ boys been more accurate in front of goal.

Twenty-seven scoring shots to the Rebels’ 11 illustrated the difference between the two sides and, despite the windy conditions, the Bushrangers squandered many chances in front of goal.

Both teams have a bye next week as the TAC Cup turns its attention to Metro Round.