From cricket to football for Merrett 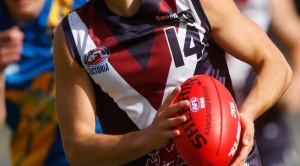 ZACH Merrett causes headaches on sporting fields the year round.

Bowlers can’t get the ball past his blazing bat and football opponents can’t keep the ball out of his hands.

One day after he belted 89 for Melbourne Grammar in an APS match, Merrett backed up with a standout performance for the Sandringham Dragons in the TAC Cup season opener.

Merrett said he thoroughly enjoyed the cricket season, but now can’t wait to immerse himself in football.

Merrett kicked two goals as the Dragons defeated Western Jets and he’s been made a quick and seamless transition from cricket to football.

Sandringham coach Justin Plapp described as “scintillating” the opening to the football season by Merrett.

It followed on from an APS XI season where he scored 487 runs and that was just from 10 games!

Initially, Merrett was in Geelong Falcons’ squad last year, but when he began to board at Melbourne Grammar he switched over to the Dragons as the travelling made it impossible for him to commute to and from Geelong for training.

What particularly impresses Plapp is the high efficiency rate Merrett runs at with his disposals. “It’s somewhere in the 90s,” enthused the Dragons coach.

“He’s a highly talented left footer. He’s been playing half forward and rolling through the midfield,” Plapp said.

As the Dragons slugged out a draw, Merrett emerged as the recipient of the most votes in the TAC Cup Coaches Award votes.

And, by his own admission, Merrett said he’s not near his peak fitness.

“I’m hoping to run out the season better this year,” Merrett said.

“I didn’t really have a pre-season last year and I ran out of puff.”

While he plays with the Dragons, Merrett, whose family comes from Cobden, is eligible to play with Vic Country in the NAB AFL U18 Championships.

It’s a driving force for Merrett, who must return to school commitments later this month.

And, we’ve seen what happens when Merrett enjoys his sport.