Head to head with Grant Williams 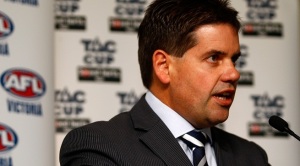 We caught up with AFL Victoria’s General Manager Grant Williams to discuss the off-season, the season so far, and what hot topics are on the horizon for the VFL and TAC Cup.

RECORD: How do you view the TAC Cup competition heading into 2013?

GRANT WILLIAMS: It just keeps on producing very pleasing results year after year. Last year there were 33 players or 55 per cent of those selected at the NAB AFL November Draft originating from the TAC Cup. Once again the TAC Cup provided the first selection, the 11th time that has occurred in the 21-year history of the competition; eight of the first 10 selections came from the TAC Cup regions and there was 13 TAC Cup graduates in first round draft selections. It again reflects very positively on the community football League network in Victoria, our High Performance Managers and AFL Victoria’s Talent Managers who look after the 12 regions where there are TAC Cup clubs. The Talent Managers are forever promoting and improving their program to ensure players maximize their ability. Not only is it rewarding to see young men progress to the AFL, but also return to their local clubs and/or leagues or transition into the Peter Jackson VFL and make an impact.

R: And, what of the Peter Jackson VFL competition?

GW: Certainly, we want to build on the standard that has been established over recent seasons. Feedback from the Geelong and Port Melbourne ‘Powered by Milk’ Grand Final was most encouraging as the game showcased the high talent and skill level. The VFL, with its unique mix of AFL listed players and non-listed players, produces an exceptionally high standard of football. What underscored that high standard of football was that another nine VFL players found themselves on AFL lists after the NAB AFL Drafts. We’re looking to see the results of the additional investment that has been made in the AFL Victoria Development League and AFL Victoria VFL Academy.

R: How does AFL Victoria handle awareness and responsibility of players adhering to the anti-doping policy?

GW: Education is the key. AFL Victoria has facilitated discussions with clubs. Given some of the breaches that have occurred in the VFL competition it should have created a greater awareness about the issues of anti-doping in competitions underneath the AFL. What is very clear is that AFL Victoria wants to educate people to make the right choice and seek qualified medical advice in the first instance. The risks are not worth it. It is also clear that commercially available supplements are not necessarily compliant. Being tested and producing a positive test is not the only way to breach the code. Items ordered over the Internet, which come through customs, will cause action to be taken that will result a breach of the code.

R: Is there tangible evidence to suggest that the popularity of the VFL and TAC Cup has increased with the explosion of social media as an immediate source of information?

GW: Twitter and Facebook have really helped AFL Victoria to promote and advertise both the TAC Cup - @TACCup - and VFL - @VFLnews. In the past two years TAC Cup twitter followers have grown by more than 500 per cent while VFL followers have soared by nearly 1000 per cent. Facebook has experienced similar spikes. If you haven’t joined either medium, join today and keep up-to-date with all the news, information and entertainment for both competitions.