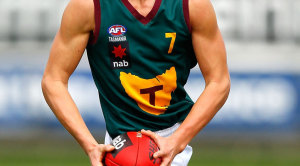 THREE late goals has fired Tasmania to an 18-point victory over the Western Jets in Round 7 of the TAC Cup on Saturday.

A five-minute burst from the men from across Bass Straight proved the difference in a tight encounter, clinching a 12.9 (81) to 8.15 (63) win in blustery conditions at Craigieburn.

With four players, including best-on-ground Brady Grey, kicking two goals apiece, Tasmania overpowered the Jets, who relied on four goals from small forward Mitch Norton to remain in the contest.

Enjoying the aid of a strong breeze, Tasmania leapt out of the block to seize a 15-point quarter time buffer.

With Grey imposing himself at the stoppages, and Toby Nankervis giving his midfielders first use, the Jets were lucky not to be further behind.

But led by tough on-baller Lachlan Hickey, who kicked one himself and had a hand in another, the Jets hit back early in the second and looked to be gaining the ascendancy.

Despite controlling much of the play and moving the ball with speed and guile at times, wasted opportunities allowed Tasmania to head to the break still holding a nine-point lead.

Two goals apiece in the third term kept the contest tight and ensured both sides went into the last change with victory in their sights.

Tasmania’s Kade Kolodjashnij provided the highlight of quarter, floating across the pack to take a clever mark and then converting his chance with a composed set shot from 40m out.

Josh Fox was another to impress with his strong marking providing an important target up forward for the visitors.

The final quarter again started goal for goal with Jets pressing hard and creeping within two points when Norton drilled his fourth. The live-wire has innate sense how to find time and space in the forward half and with 19 goals this season is proving arguably the Jets' most consistent performer.

But just as Norton and his Jets appeared headed for victory, Tasmania’s leaders lifted and wrestled back the momentum. Grey started the surge with a crunching tackle that finished with a goal to fellow hard-nut Thor Boscott.

He then added one himself to seal the game, before Jake Smith iced it with a terrific snap in the dying seconds.

Grey, Boscott and Kolodjashnij were all significant contributors and were well supported by agile big man Rohan Bones.

For the Jets, Hickey and Norton could both hold their heads high, while Jason Robinson was impressive at half back.