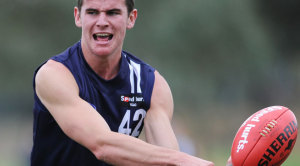 The Geelong Falcons have climbed to the top of the TAC Cup ladder after clinching a hard-fought win over the Calder Cannons.

On their home turf, the Cannons looked headed for a stunning upset with three unanswered goals at the start of the final term.

The last of the three, a running goal to Anthony Prestia from an impossible angle drew the hosts level and into to pole position.

But The Falcons held firm, with classy midfielder James Tsitas bagging two quick goals to spark a run of five in a row.

Tsitas was one of five Falcons to bag two goals in the win, joinging Billy Beardsell, Darcy Gardiner, Alex Hickey and Matthew Boag.

While the Falcons started warm favourites, the Cannons' defensive pressure ensured the visitors enjoyed just a slender 7-point lead at the main break.

Despite extending that to 20-points at the end of the third term, the Cannons remained in the contest and proved throughout their ability to move the ball with menace.

First-gamer Jarryd Bonello provided the spark early in the match with two goals, kicked on the back of a blistering turn of speed.

Paul Ahern and Matthew Merlo were also crucial contributors, while Jake Owen again showed his versatility with stints both in attack and defence.

Gun Falcons midfielder Lewis Taylor racked up possessions and his first-class delivery made light of the windy conditions.

Alex Hickey was also pivotal to the win, showing his poise in heavy traffic and collecting disposals at will.

Another surprising feature of the Falcons’ play was the use of big man Fraser Fort at centre-half back. The athletic tall has been impressive up forward in the early part of the season but swapped roles with ease on Saturday, combining well with fellow defender Jye Cross.

The Falcons face the Bendigo Pioneers in Country Round this weekend, hoping to cement top spot on the ladder despite missing a number of players who are unvailable due the NAB AFL U18 Championships.

The Cannons enjoy a rest this week before returning to Highgate to meet the Dandenong Stingrays in Round 8.