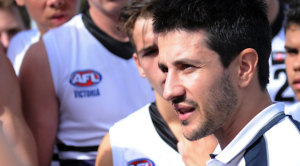 The Northern Knights have powered back into the top eight, with an 18 point victory over the gallant North Ballarat Rebels at Preston City Oval on Saturday, as Damian Watson reports.

In a highly physical encounter, the Knights opened the floodgates in the final term when they booted five goals, while confining the Rebels to a solitary major.

However, Knights coach Marco Bello was not entirely satisfied with the performance of his team, as they struggled to maintain their work ethic throughout the four quarters.

“I felt that we played into their hands a little too much and we weren’t able to capitalise when we had the footy,” he said.

“The Rebels booted six goals from free kicks that we gave away and that’s not good enough for us.”

Despite these concerns, Bello’s line-up remained composed under pressure to prevail in tight and rugged circumstances. The Knights had key contributors in Liam Hunt and Jayden Short, as they exerted their influence on the match when the result was in the balance.

Meanwhile Liam Bowkett, who has predominantly played as a ruckman for the Knights, earned praise from his coach after venturing forward and converting three important goals.

“Liam really helped us today with his forward role and was a key to our structure,” Bello said.

“We threw him up forward and I was really pleased with his effort as he made a real difference.”

The winless Rebels, despite displaying promising form, still languish at the bottom of the TAC Cup table.

The men in black and white thrived in the clinches, with their tenacity and tackling pressure on show while locking the ball inside their forward half.

Josh Webster, Jake Robinson and Dallas Willsmore were among the Rebels’ best, while Louis Herbert was also a valuable player, roaming across half back and continually finding a target by foot.

Despite their best efforts, the Knights’ class eventually won out.

The victory catapults the Knights into sixth spot on the ladder, cementing themselves as a finals contender.

However, the Knights’ win was soured when their skipper Jake Kalanj suffered a serious hamstring injury in the dying stages of the match.

“The injury looks pretty significant, we have to wait for the medical report but I couldn’t see him coming back for at least four weeks,” Bello said.

The Knights will travel to Morwell next week for their clash against the Gippsland Power, striving to register their fifth victory for the year.

Meanwhile, The Rebels will go in search for their first victory in season 2013 when they face the Oakleigh Chargers at Horsham City Oval next Sunday.