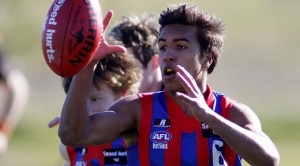 Kennedy-Harris, a first year science student at Melbourne University, is the co-captain of Oakleigh Chargers - the first Indigenous player to captain a TAC Cup club.

As well as his leadership role with Chargers, Kennedy-Harris is also in the Vic Metro squad, which this weekend will open its NAB AFL Under 18 Championship campaign in Brisbane.

He admits he’s looking forward particularly to this weekend for many reasons, quite apart from the honor of representing Victoria on the national stage.

“To have the acknowledgement of the Indigenous contribution to the AFL recognized is pretty special,” Kennedy-Harris said.

“I feel a little special being able to play for Victoria in this round. Football is pretty big in the Indigenous community and it’s been a big part of my life.

“To be where I am now, I’m pretty proud of myself. Each step is a little closer to a childhood dream of playing AFL.

“Like a lot of Indigenous boys it is a pretty proud thing.”

While he said he hasn’t had what he would call a role model, Kennedy-Harris said he’s taken great solace from some of his Indigenous peers like Jarman Impey and Clay McCartney, who also play in the TAC Cup.

He said the camaraderie of those and others helped him progress through the KickStart program.

“It’s kept me going, kept me stepping it up,” Kennedy-Harris said.

“I remember when Jarman and Clayton were part of the AIS (AFL Academy) squad and how proud I was that they had been able to do that.

“For us there hasn’t been too many Indigenous players to look up to in Victoria. To start setting a new trend is pretty special. It’s like we’re starting a bit of a movement for the Indigenous talent in Victoria.

“I have a lot of recognition and respect for the KickStart program and what it’s done for myself and the other boys coming up through the TAC Cup system.”

The Kickstart program is for Indigenous players at the Under 15 level, which introduces them to an elite football environment and includes playing for the Flying Boomerangs, an all Indigenous team.

Kennedy-Harris said it had helped him with his leadership skills.

“We talk a lot about our culture and what it means to be an Indigenous person to each other,” he said.

“I think it accelerated a lot of us in terms of our character and our footballing ability and I think it is starting to show with growing number of players starting to represent TAC Cup teams.

“I’ve been given a lot of opportunities, some of them I may not have deserved, so I feel pretty fortunate,” he said.

“If you really want to reach somewhere you just work as hard as you can until you achieve it and then you set a new goal.

“You keep climbing until you can’t climb any further. It is the best way to look at things, not just football.”