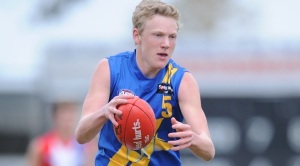 NO one from Eastern Ranges was surprised that Ben Cavarra dominated Vic Metro’s opening match of the NAB AFL Under 18 Championship match against Queensland.

The Ranges faithful have watched repeatedly as Cavarra, just one of four players in the club’s history to win its best and fairest as a ‘bottom age’ player, show cased his enormous talent.

While Cavarra still has much to do to emulate the other three – Sam Mitchell, Rory Sloane and Jonathon Patton – the Ranges’ rover certainly made an impact in his first game wearing the Big V.

Cavarra collected a game high 35 possessions, boasted seven inside 50s and kicked two goals as Vic Metro emerged from its trips to Brisbane with a 40-point win against Queensland.

Certainly, the winning margin could have been much greater, but Metro’s conversion – 12.28 (100) – was poor while conversely Queensland’s better strike rate – 9.6 (60) kept the loss from blowing out.

He said for all Metro’s control on the game, Queensland crept within 10-points in the last quarter before Metro put the game beyond doubt.

“I thought our guys were fantastic the way they absorbed that challenge then refocused and kicked away to what was a pretty comfortable 40-point win,” Allison said.

“We played some pretty good footy in patches, but were not able to get reward for our effort.

“Our quick ball movement was good, but I was really proud of our ability to defend when Queensland had the footy. This was an area that this group wanted to concentrate and get better in.”

Vic Metro’s dominance can be measured in many ways, quite apart from its ascendancy in scoring shots.

They had more than 100 more possessions and went inside 50 an impressive 28 more times.

Allison praised Cavarra for his outstanding work rate as well as Calder Cannons Touk Miller who had 26 possessions with game highs in clearances – seven – and tackles – nine.

The one downside to Metro’s win was the injury to Oakleigh Chargers’ Lewis Fitzgerald who was injured late in the first quarter.

It left Metro’s rotation, on a day when it was a balmy 23, down one, which applied added pressure.

“Considering everything that happened there were a lot of positives to come from the match and there is still improvement to come from this group,” enthused Allison.

Metro will make considerable changes to its team to play NSW/ACT at Visy Park on June 9.

Click HERE for all the best players and goal kickers.