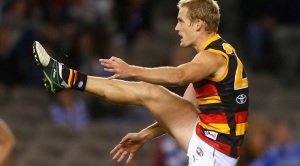 After making his AFL debut in 2012, the 20-year-old has been effective both up forward and through the midfield in his six games for Adelaide this year, while going head-to-head with some of the AFL's biggest names.

“Sam has taken some significant steps in his development and been a key part of our team in his six senior games this season.

“He’s played a variety of different roles for us, including important defensive jobs on some of the competition’s best players. He’s really relished those challenges and has also been able to hit the scoreboard consistently through his hard running and strong work ethic.

“Sam plays with maturity well beyond his years and is a real leader among our core group of young players.”

Kerridge, who played his junior football with Mildura, was drafted to Adelaide with the Crows’ first pick in the 2011 NAB AFL National Draft, going number 27 overall. During his testing at the NAB AFL Combine, Kerridge starred in the endurance testing, finishing fourth in both the shuttle run (beep test) and 3km-time trial.

This followed a standout 2011 season with Bendigo Pioneers, after sitting out most of the 2010 TAC Cup season due to injury.

After playing just one game in his debut AFL season last year – coming on as a second-half substitute in the Round Three loss to Hawthorn – Kerridge has played six consecutive matches for Adelaide since coming in to the side that defeated the Western Bulldogs by 52 points in Round Four. Since Round Four the Crows have a 4-2 win loss ratio.