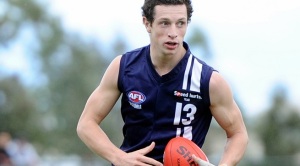 DEALING with disappointment is a life companion, football included.

Geelong Falcon’s Darcy Lang had his heart set on representing Vic Country in the NAB AFL Under 16 Championships two years ago.

Lang moved through all the various stages and player cuts, but he fell one short.

“I was an emergency for the (Vic Country) Under 16s,” Lang recalled on the eve of the start of the NAB AFL Under 18 Championships, which sees Vic Country travelling to the Northern Territory.

“I didn’t get a call up. It was pretty disappointing at the time, but I’m in there now and it’s a privilege to wear the Big V.”

Lang said he didn’t focus on gaining selection for the Championships at the start of the year with his concentration honed on playing well for the Falcons.

Lang described the season opener “as not great”, but he quickly found form as he adjusted to his new role.

Falcons’ coach Andrew Allthorpe moved Lang, who played every game as a bottom age player last year mainly as a forward into the midfield, a position he said he found a “little different”.

The advice from the Falcons’ coaches was that Lang needed to work on his “tank” so he could handle the transition to the midfield role.

After the opening game, Lang has averaged 20 plus possessions and proved one of the pivots to Geelong’s unbeaten start to the season.

Lang said the unity within the team had been a great driver for the team success and the focus had been contained to each up-coming game.

But, Lang said he began thinking of the NAB AFL Under 18 Championships once the trial matches rolled around and he was among those trying out for a spot in the squad.

“Once the selection came up, I really wanted to make the team,” he said.

“But, I didn’t play as well as I would have liked in either of the trial games. I was hoping I’d done enough throughout the season to put my name up there.

“I’ve been trying to keep the form up week to week.”

Like all players, several areas of the game were identified to Lang as aspects of the game he needed to address.

For Lang they were winning contested possession, improving his tackling numbers and defensive transition.

“I’ve been working pretty hard on them,” Lang said.

It’s been enough to impress Vic Country coach Mark Ellis and his co-selectors who included Lang in the squad.

Lang said he hopes the opportunity arises where he will get to wear the Big V jumper. It will expunge the disappointment from two years ago.