Bendigo focus on the positives 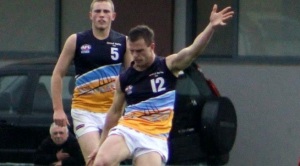 The results have not gone their way, but the positives for the Bendigo Pioneers keep shining through. From young players Harry O’Meara, Fergus Payne and Alex Hywood, to the pressure applied to their opponents, plus the week in, week out effort travelling across Victoria, the Pioneers are persisting with their game as Davis Harrigan reports.

Spirits were still high after the Pioneers 54-point loss to the Eastern Ranges on Saturday. Coach David Newett was extremely pleased with the way the players went about their “shut down roles” against a dominant Ranges outfit.

The Pioneers welcomed the return of Sam Heavyside, who was cruelled by a serious injury in 2012. His impact around the contests was superb, as was his ball usage.

Slippery ball conditions did not help the Pioneers, but coach Newett did not let go of the thought that the show of effort was a big boost for the young side.

“We want to be competitive, and we want to win when we step on the field. There’s finals to be played, and we won’t go through training without having a goal. We feel we’re on the right path with our young kids.”

Playing against a side like the Eastern Ranges was always going to be a challenge, says Newett, but the fight from the players suggests the Pioneers are not a “toy”.

“Liam Barrett only had four possessions, but he held his man really well. Jacob Chisari and Liam Byrne did a lot of grunt work through our midfield engine room. Danny Jones did a really good job on (Thomas) Boyd, who got supply early.”

The round 8 game against the Ranges was played in slippery and tough conditions, and Newett was in no doubt that the wet game made for plenty of errors and turnovers.

“On a dry day, the kicking would have hit the target more out of the backline. It was a pretty slow old game, it certainly changed with the wet weather, and we had to adjust.”

Key to Newett’s preparations is helping to solidify a game plan where simple errors are worked out.

“It’s also about (getting) experience from a lot of the underage boys who are stepping up who will develop, plus (utilising) our really good midfield group.”

When the Pioneers were able to break through the Ranges defence, it was O’Meara, Hywood and Fergus Payne who provided the run and roving around the contests. Being able to convert inside 50 opportunities to goals is another item Newett wants to tick off the list.

Another important factor in preparing for games is allowing for the “travel factor”.

“Some kids travel from Mildura, which is six hours from Melbourne. It’s part and parcel of the game; country boys know how to travel, but it’s always a battle when they’re (constantly) on the road. The long hours definitely add up across the course of the season.”

Two home games in the next three rounds for the Pioneers will see the travel reduced, and both Newett and the young players will be looking to bounce back against the Calder Cannons, North Ballarat Rebels and Murray Bushrangers.