Vic Country - What the coach had to say 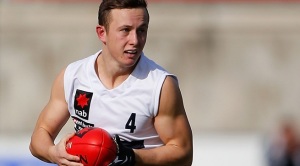 IF Mark Ellis talks about the NAB AFL Under 18 Championships as a job interview then Vic Country are applying for executive positions this weekend.

Certainly, Vic Country players are well credentialed as they head into the match against South Australia at City Mazda Stadium on Sunday.

Vic Country head into the first match against a Division 1 team on the back of two impressive wins against Northern Territory and more recently Tasmania.

After defeating Northern Territory in trying, unfamiliar conditions in the Top End, Vic Country were just as impressive as they demolished Tasmania.

Ellis said selectors would pick the best available team for the match against South Australia, which belted Queensland by 100-points last weekend.

“We’re getting into the bigger games now where the pressure will be on,” Ellis said.

“We have adapted pretty well so far. I think we have a game that will stand us in pretty good stead.

“It’s going to be tough opposition, but as we say it’s like a job interview every week.”

Ellis noted the stark contrast conditions between the first two games as well as the different team composition – about 10 changes - that Vic Country took into the Visy Park match against Tasmania.

“It was good to play as well as we could and win,” Ellis said.

“While the weather was completely different, the challenge was to get a virtually new team to click together.

“We focused before the match to get the game going the way we wanted it played and we were lucky enough to be able to do that.

“’Tassie’ did a good job of trying to hold us up and block us up, but the boys stuck at it well and were rewarded.”

Taylor and Tsitas, both members of the AIS/AFL Academy, nudged 60 disposals between them as they dominated the midfield and provided plenty of drive and opportunity for the teammates inside 50.

But, it was not only racking up high possession numbers that impressed Ellis who noted that Tsitas laid 12 tackles while Taylor won six clearances.

“Those two know each others game inside out. They certainly look for one another when they’re playing,” Ellis said.

“They rotated through the midfield and played some good footy.”

He said Zac Jones, a Stingray whose brother Nathan plays for Melbourne, did a good job across half back as did Falcons Nick Bourke and Murray Bushranger Nick Holman.