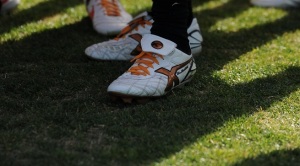 AFL Victoria endorses the message of Step Back Think, a non-profit organisation which is raising awareness about street violence.

Its theme of using your head instead of your fists will be highlighted across a number of games this weekend in the AFL, Peter Jackson VFL and TAC Cup through its ‘Lace Up’ campaign.

Clubs have been asked to wear orange boot laces in a united stand against street violence and its serious consequences.

One reckless punch can deliver devastating, even lethal ramifications which can change a person and their family’s life forever.

Sadly, one punch was the catalyst for launching Step Back Think following the assault of young Melbournian James Macready-Bryan, who was felled and suffered brain damage in a tragic street violence act in our CBD.

The scary thing is that anyone can be targeted in random, senseless acts of street violence.

AFL Victoria hopes the campaign can engage and help educate people about how to behave when confronted with a potentially explosive situation.

The message is clearly Step Back Think and help erase street violence.

Also this weekend, Williamstown will continue their support of the charity Ladder, raising funds for youth homelessness, while Sandringham and Box Hill Hawks will recognise the Blue Ribbon Foundation as they play for the Blue Ribbon Cup.