On the road with Vic Country 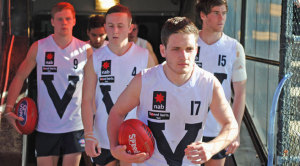 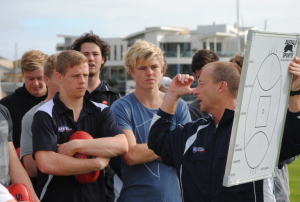 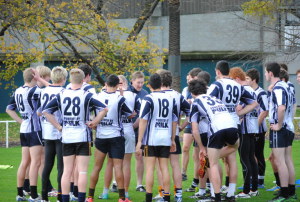 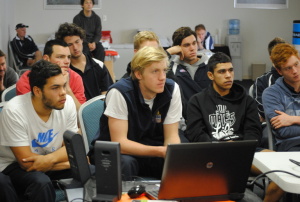 It was the last thing any of us wanted to hear. Our flight from Adelaide to Melbourne on Sunday night had been delayed by an hour and a half, and the long trip home just got a little longer.

Immediately the calculations begin. The North Ballarat Rebels contingent, including team manager Phil Partington and young forward Dallas Willsmore are now due to back in Ballarat at 11pm, while it will be beyond midnight before Murray Bushrangers duo Jarman Impey and Nick Holman make it back to Shepparton.

A frustrating thought when school awaits on Monday morning.

The delay is particularly annoying for Gardiner, now on crutches after injuring his ankle late in the third quarter and surely seeking the comfort of home.

For the young defender and the 22 other players and 15-odd support staff, the wait means more time to dwell on the 34-point defeat suffered at the hands of a supremely talented South Australian outfit; time to figure out what went wrong.

It’s a sobering evaluation after so much went right on the three-day trip, a journey that began on Friday with a light training session at Visy Park.

The players arrived in batches, gathering from all corners of the State, some enduring two-hour plus drives to be there.

For Dandenong Stingrays defender Josh Pickess, the fresh air at training is perfect after a morning spent in a three-hour English exam, while for others it’s a chance to burn up some nervous energy before the 5.40pm flight.

Not everyone is nervous though and for many it’s a chance to catch up with mates from different TAC Cup regions.

Classy Falcons midfielder Nic Bourke and Stingrays speedster Billy Hartung are like two peas-in-a-pod with a few sledges offered in both directions, while Impey and fellow small forward Clay McCartney (Stingrays) are soon joined at the hip.

The plane trip is quick and uneventful and soon we are standing outside the hotel in Glenelg with rooms being allotted.

Players are divided into threes and Vic Country High Performance Manager Leon Harris issues the rules, “the biggest bloke gets the double bed”.

It’s good news for Gippsland Power big man Jack Leslie at 198cm tall, but not so much for his Power teammate, small forward Alex Saunders.

Soon the first meeting begins in a conference room at the hotel which has been set up thanks to property steward Brian Kinder and much loved trainer Richard Embleton, who arrived early after making the trip by car.

The huge tubs of Powerade and filtered water are good to go and the players waste no time in seeing who can be the first with blue lips.

Harris sets the tone for the weekend with a speech that has the boys attentive and focused as he drills in the opportunity the group has in front of them.

He singles out Hartung, announcing that head coach Mark Ellis and his assistants have decided he’ll have a run-with role on dangerous SA wingman James Aish.

Aish’s skills are highly regarded and with Hartung’s own array of offensive weapons, including a blistering turn of speed, the match-up promises to be one to watch on Sunday.

After the meeting concludes it’s on to dinner and the first chance to get to know the players.

Hugh Goddard sits beside me and soon I understand why the Falcons forward is so highly regarded.

He may be the youngest player on the trip, but Goddard has leadership written across his face. As talented as he is on the field, he’s as measured and sincere off it.

Pickess is another who impresses. He’s been named the 23rd player, meaning he’ll be a bystander on Sunday, but he hides his disappointment with a team-first attitude you can’t help but admire.

After breakfast on Saturday morning it’s back in the meeting room where each player is handed a GPS report from last week, giving individuals a chance to see how their measurements – such as ground covered, the amount of efforts at top speed, and their meters covered per minute – stack up against the rest of the team.

The group then heads outdoors for a lively session in a nearby park which begins with a quick game from assistant coach Glen Manton that gets everyone – including the support staff – sharing laugh.

After some more games that have the players working hard on their skills, attention turns to the team’s structures and the group works through how they’ll set up for different scenarios; a ball up on the wing, a kick-in after a set shot from the opposition.

Ellis and assistant coach Darren Flanigan take a back seat, putting the responsibility on the players to get to the right spots.

Tsitas comes into his own and his standing among the group is obvious. A larrikin at heart, the inside midfielder helps his quieter teammates come out of their shells but for now he’s all business, directing traffic and making sure everyone knows their roles.

Back in the meeting room, former Vic Country tough nut Andrew Hooper, who now plays his football with Glenelg after leaving the Western Bulldogs at the end of last season, stops in for a chat.

Harris introduces him as “pound for pound one of the best performers in the Vic Country jumper of the past 15 years.” Hooper’s insights in what it means to play in the Big V jumper and his time at the Bulldogs are invaluable to the players and when Bendigo Pioneers defender Isaiah Miller stands to thank him on behalf of the group, everyone is grateful for his time.

With all bases covered the players are given the afternoon to do as they please.

Some, like Falcons defender Fraser Fort, relax and watch the footy, while others head in to town. Tsitas and Willmore visit the hairdresser for a trim, while Darcy Lang (Falcons) and his roommates enjoy a bit of wrestling on TV.

Before long the boys are back in the meeting room where Ellis simplifies the plan into two words; “intent” and “effort”. A big serve of lasagna and salad for dinner keeps everyone happy before an early night is called.

The skies are clear on Sunday morning and despite the obvious nerves at breakfast, it’s got everyone up and about.

Music is a common theme among the players as most don the head phones as the group gets packed to leave for City Mazda Stadium – the home of South Australian Football League club West Adelaide.

Despite the butterflies the group seems relatively relaxed and again Tsitas, still smiling and having a joke, is at the centre of it.

A lot will rest on his shoulders today without fellow Falcons star Lewis Taylor serving a one-match suspension.

Once we’re at the ground it’s down to business and physiotherapist Carli Harris and a team of sports trainers soon have the boys strapped and raring to go.

After Ellis reiterates the coaching staff’s message, the warm-up begins under the watchful eye of Jamie Hepner (head of athlete management) who has already issued the boys with their GPS units.

The players attack the warm up and with the first bounce just minutes away it’s over to Ellis for one last word.

The speech is short but stirring and you can’t help but be swept up in the moment. It’s time for another chapter in the rivalry between the two football loving states.

A lot goes to plan over the next two hours. Small forwards Impey, McCartney and Saunders are relentless with their pressure, while Gardiner, Zak Jones (Stingrays) and Fraser Fort are resolute in the defensive 50.

But the SA boys are a class above.

Vic Country starts well but can’t convert and soon the hosts have the first three goals of the match.

Hartung manages to cut Aish completely out of the game and after the main break he puts the foot down to ignite the Vics.

Almost out of pure stubbornness the visitors claw back to within six points of SA, but today will not be their day.

They’ve run into a very good team and the 34-point final margin, while reflective of the difference, is hard to swallow for the Country boys.

Injuries to Gardiner, who was arguably best on ground to three quarter time, Goddard and Bushrangers utility Nathan Drummond have the team doctor Paul O’Dwyer busy in the rooms afterwards.

To make matters worse for Gardiner, he’s been selected to submit a random drug sample with the ASADA officials and his journey to the airport is pushed back.

Time, though, is the least of our worries with the delayed flight adding a little more pain to the weary bodies of the players.

While disappointed with the result, Tsitas typifies the attitude of the group, determined to make amends when they take on Western Australia in Geelong in two weeks time.

And, judging by how close the entire group is, you get the feeling the best is yet to come.