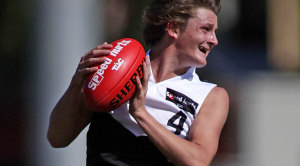 NORTH Ballarat Rebels have recorded their second win of the season, defeating Bendigo Pioneers by six points in a thrilling contest at Eureka Stadium on Saturday, writes Joel Dwyer

In a contest that was in the balance until the final siren, a spirited Rebels outfit managed to hold on in front of their home fans.

The match began with both sides trading goals, leaving scores even at the first break.

The Rebels made their charge in the second quarter, booting 4.3 to Bendigo's 0.1, to take a comfortable 26-point lead into the half.

The message from Bendigo coach David Newett at half time obviously worked, as the Pioneers came to play in the third term, booting 4.6 to 1.3, to be within five points at the last change.

Displaying their level of improvement since the beginning of the season, the home side rallied to boot three crucial majors in the final term, to hold off a fast finishing Pioneers outfit.

Rebels coach David Loader believed the hard fought win had capped off a decent month for his side.

"To win those tight games it usually holds you in good stead," Loader said.

"At this point in time it hasn't been a bad month for us, winning two out of three games. We are certainly showing we are taking steps in the right direction which is what it's all about."

Loader was also rapt with the performance of midfielder Matt Crouch, who made his return after missing seven weeks with a wrist injury.

"I think he was our most influential player. He's a terrific bloke who we're rapt to have back in our team and he certainly gave us some bite around the footy," Loader said.

Loader also praised Josh Webster and Sam Bennett for their role in the backline, along with the effort shown by Nick Weightman and Lachlan Cassidy.

For the Pioneers, half-back flanker Isaiah Miller was influential in generating attacking forays for the visitors.

The only downside for the Rebels was a knee injury to midfielder Jake Robinson, which will be assessed during the week.

North Ballarat face a road trip this weekend, with a tough match-up against the Geelong Falcons in Cragieburn on Sunday.