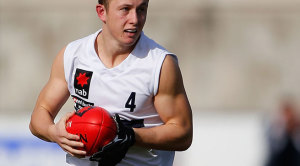 THERE are few better sights in football than watching Billy Hartung fly down the wing, writes David O'Neill

To see the Dandenong Stingrays speedster tuck the ball under his arm and burn up the grass is something to behold.

While Hartung’s greatest asset is well renowned, at last weekend’s NAB AFL U18 Championships clash with the South Australia, a new facet of his game emerged.

Vic Country would eventually fall to a supremely talented SA outfit by 34 points, but not before Hartung showed the footy world he had more than one string to his bow.

Given the task of shutting down highly regarded SA midfielder James Aish, Hartung proved his defensive side of the game should not be underestimated.

“I found out I got the job on Aish mid-week and obviously playing on a player of that quality was a pretty big challenge for me.” Hartung said.

“A lot of people have knocked the defensive side of my game and I know I still have a lot to work on, so it was a real confidence booster for me.”

After restricting Aish to just four possessions in the first half, Hartung ignited Vic Country in third term when set free to play his natural game.

With typical verve and dash, the Stingrays star helped his side claw back to within six points before SA rallied late in quarter to snuff out Vic Country’s hopes.

“He (Aish) went forward in the second half and that allowed me to play my own game and not concentrate so much on shutting down an opponent,” Hartung said.

“It was a goal for me at the start of the season to play really consistent footy. I didn’t just want to play one good game every few weeks but instead be more consistent throughout the year.”

Vic Country coach Mark Ellis said it was fantastic to see Hartung play such a selfless role for the team.

“We as a coaching staff were really pleased for Billy because we set him a task and he acquitted himself very well,” Ellis said.

“He works very hard on his game and thinks deeply about it so we’re just pleased for Billy.”

“There is no doubt he’s an exciting player but against SA he proved that he can also work really hard the other way.”

Hartung and his Vic Country teammates will be back in action this Friday against Western Australia at Simonds Stadium in Round 4 of the NAB AFL U18 Championships. The first bounce is at 12.35pm.