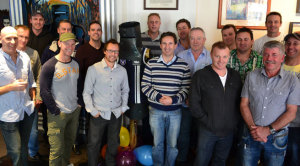 Carlton champion Chris Judd was drafted from Sandringham with the third selection of the 2001 AFL National Draft and was named alongside Collingwood’s Luke Ball as one of the Dragons’ greatest on-ballers.

“My strongest memories are probably of pre-season. It was really good getting kids from different footy clubs together to play TAC Cup,” Judd said.

Since 1992, when the TAC Cup started, road safety education of all clubs has been an integral component of the program, with the aim of creating champions on the field and safer drivers on the road.

Messages have evolved from the inaugural ‘Live and Learn’, to ‘120 hours of practice’ and now ‘Speed hurts’, which began last year.

“(The TAC Cup) is an amazing program, it really is. For kids that grow up in Victoria, to be exposed to a program that is not far from AFL level is great,” Judd said.

“The competition has evolved - TAC Cup clubs are doing a lot of the same things as AFL clubs, with the level of coaching, professionalism and fitness staff in place,” Primus said.

“It's great to see that association (between the TAC and Victorian Under-18 representative football) strengthen over 21 years.”

In that time, the competition has grown from six clubs to 12, and produces around half of the players selected in the AFL National, Rookie and Pre-Season drafts.

TAC CEO Janet Dore said the TAC was extremely proud of its partnership with AFL Victoria.

“It has been and remains one of the great sporting relationships in our country,” she said.

“Young people continue to be over-represented in road trauma, and we see the TAC Cup as a vital platform in working to rectify this.”